We woke up in our comfortable cabin, and Garrett made coffee in the coffee pot. It was really weak, but fortunately the good breakfast place in town had just opened; so we walked around the corner to get some real coffee and breakfast to go. We made it back just in time to catch Good Morning America, something we like to watch when we’re not at home. We weren’t in a hurry to get out of town, Lake City seemed like a quiet enough town that we may not get a ride until mid-morning.

Around 9am we left to try and hitch back to the pass. There wasn’t much traffic leaving town, but a man stopped to inform us that we were hitching in the “wrong place,” and that Slumaggon Pass a few miles down the road was the place to be, because you could catch people leaving town as well as the lake. He gave us a ride there, along with a pair of hikers we’d never seen before a little down the road. We were a little skeptical of his advice, Slumaggon Pass doesn’t exactly sound like a great place to be, but when we got there he told us the hikers he’d dropped off earlier in the morning were gone, so that was a good sign.

It took us about 20 minutes to get a hitch, during which we learned the hikers we’d shared the ride with were just starting the Colorado Trail and had decided to start further north than Durango, the southern terminus, due to the 416 forest fire that was burning in the area. It’s been causing all the smoke we can see from the trail. Despite few cars passing by, soon enough we were whisked off up the winding road to Spring Creek Pass.

When we arrived, we ran into our friend Steele who was trying to hitch into Lake City. We hadn’t seen him in nearly 3 weeks since Chama. It was great to catch up with him, and we had plenty of time to talk as no cars passed by in the 15 minutes or so we spent talking. We eventually headed north on the CDT, and waved goodbye to Steele. Hopefully he got a ride sooner than later! 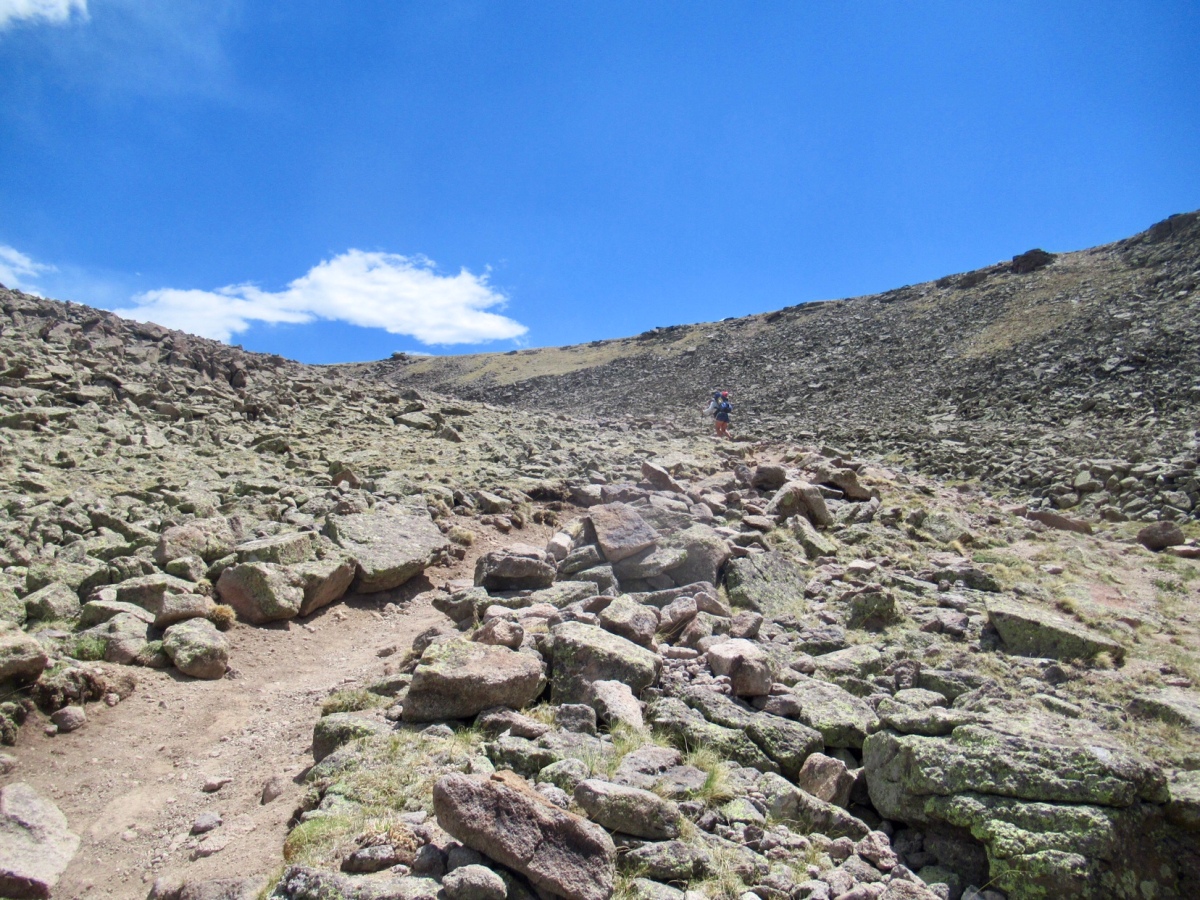 The trail climbed for a few miles out of the pass, and we quickly climbed above 12,000ft. We stoped for lunch at the top, then enjoyed the trail rolling over Snow Mesa. There was hardly any snow, and the mountains were softer than the jagged peaks we’ve been traveling through. We had hoped get 10 miles in, and by 4:30pm we’d gone just over that. 4:30pm is really early for us to stop, but the trail inclined steeply up for the next few miles without any flat ground, and we were unsure we’d be able to find water and camping between 6-7pm when we normally stop. So we called it early. Also, Garrett was tired which is unusual for him. He said he didn’t sleep very well the night before, and thinks it may have something to do with the pint of coffee ice cream he had before he tried to fall asleep. He may be onto something.

Our spot was really nice, and we tucked back into the trees near a pond. All evening we could peek out from the trees, and observe a young moose grazing on the vegetation on the other side. She must have been there for three hours, it must have been some good eating!