We slept a few miles from Pinchot Pass, so we were able to reach the pass by mid-morning. Pinchot, out of all the passes so far, was the easiest. The ascent was relatively mild, and there were few snowy sections. Per usual, the views were great!

The rest of the day was a gentle hike, through forests with a few stream crossings.

After lunch we started up Mather Pass. The snow on the way up wasn’t bad, but on the way down there was a steep boulder field with heavy snow. We slowly picked our way through the rocks and snow, and made it down to beautiful Pallisades Lake & Creek. 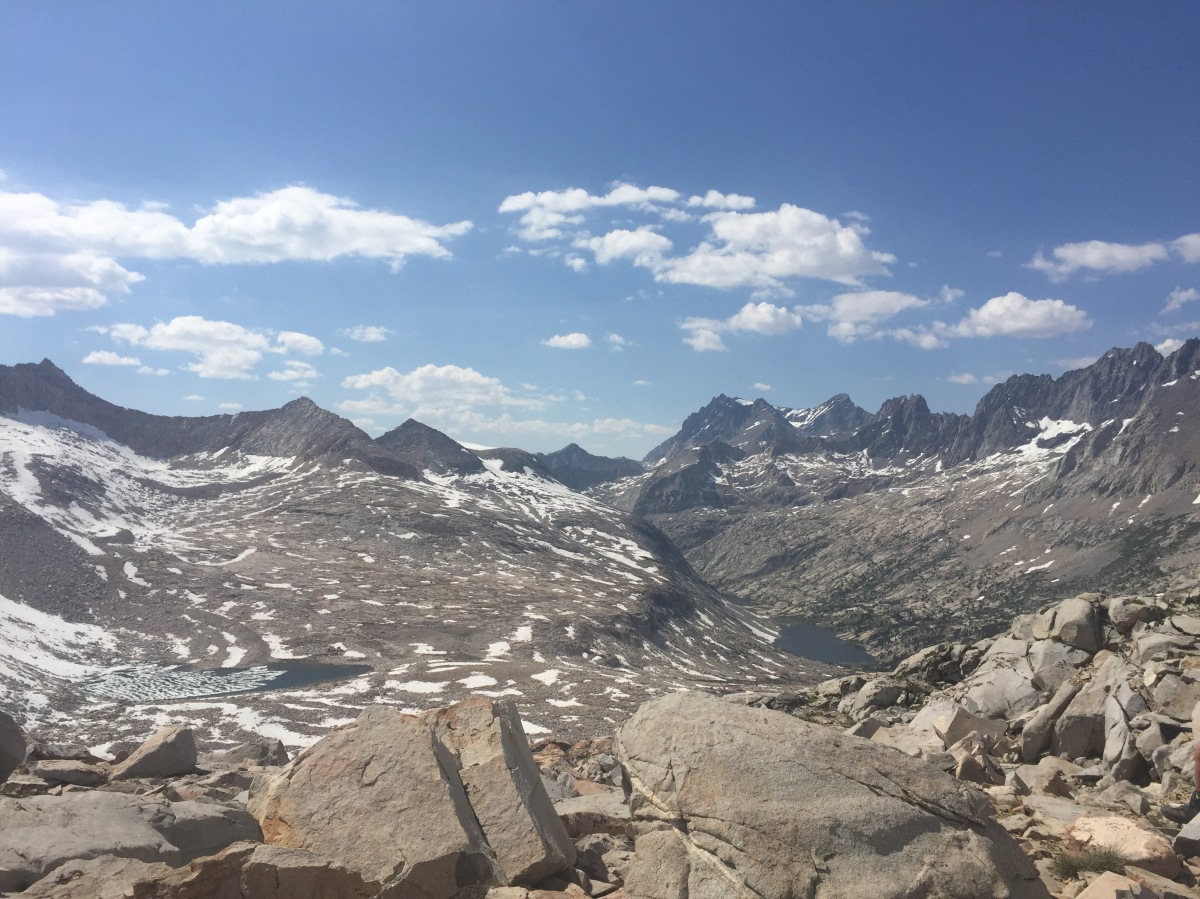 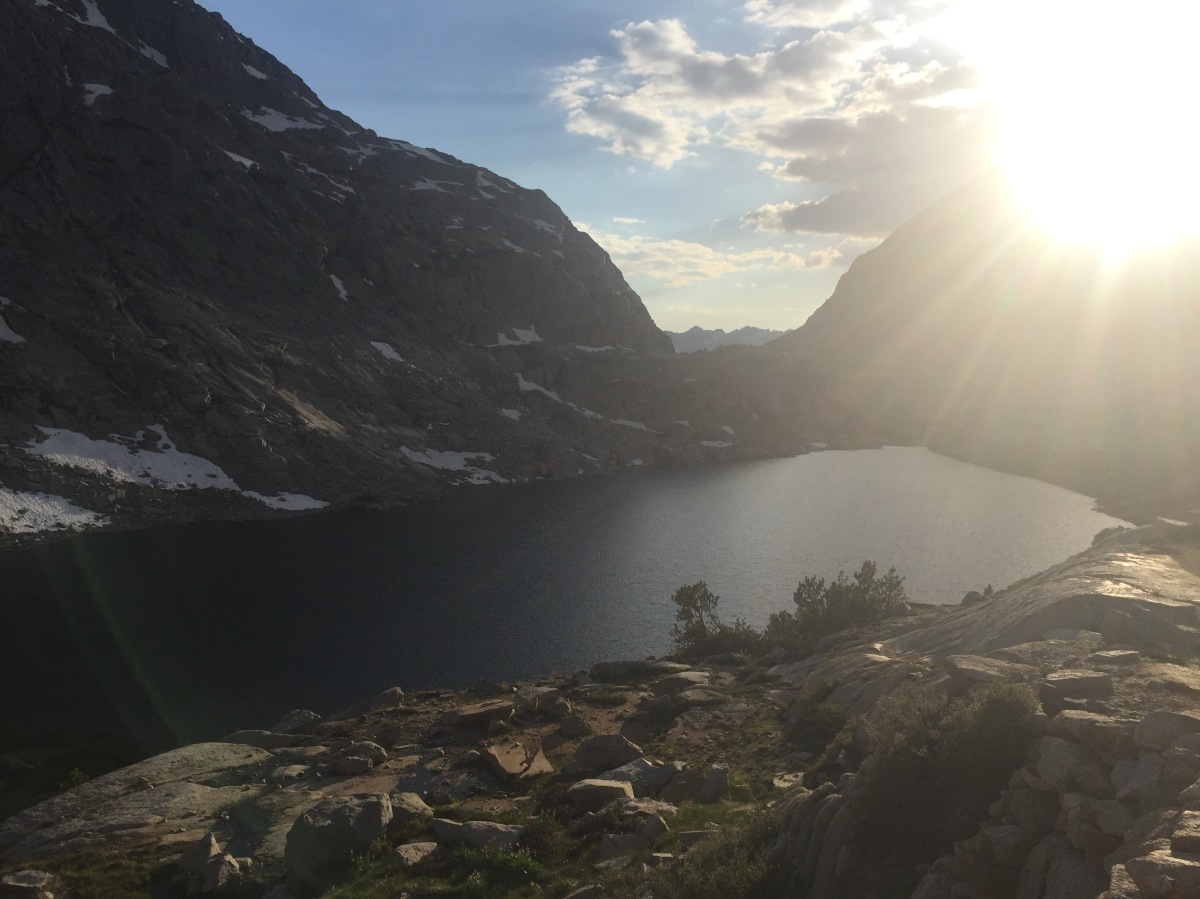 We enjoyed a great dinner overlooking the lake, then continued on down into the valley past waterfalls and a raging creek. We found an awesome campspot on the way down, and caught the sunset before calling it a day.

Day 53 brought yet another pass, but we weren’t too worried as Muir Pass was supposed to be the easiest we’d climbed so far. We hiked about 12 miles, and stopped for a snack about 4 miles below the pass in the trees around 1pm. It started to rain, then we heard thunder, so we decided to wait out the weather before heading above treeline. As we waited, the rain got heavier, then we heard lightening, then it hailed a bit. Fortunately, the rain soon abated and we could see blue skies behind us. We had been told that the thunderstorms in the Sierras tend to be in the afternoon, then pass in a few hours, so we started hiking thinking the storm was past. We got a few miles in with blue skies, but it took us awhile as there was a lot of snow and water on the trail. 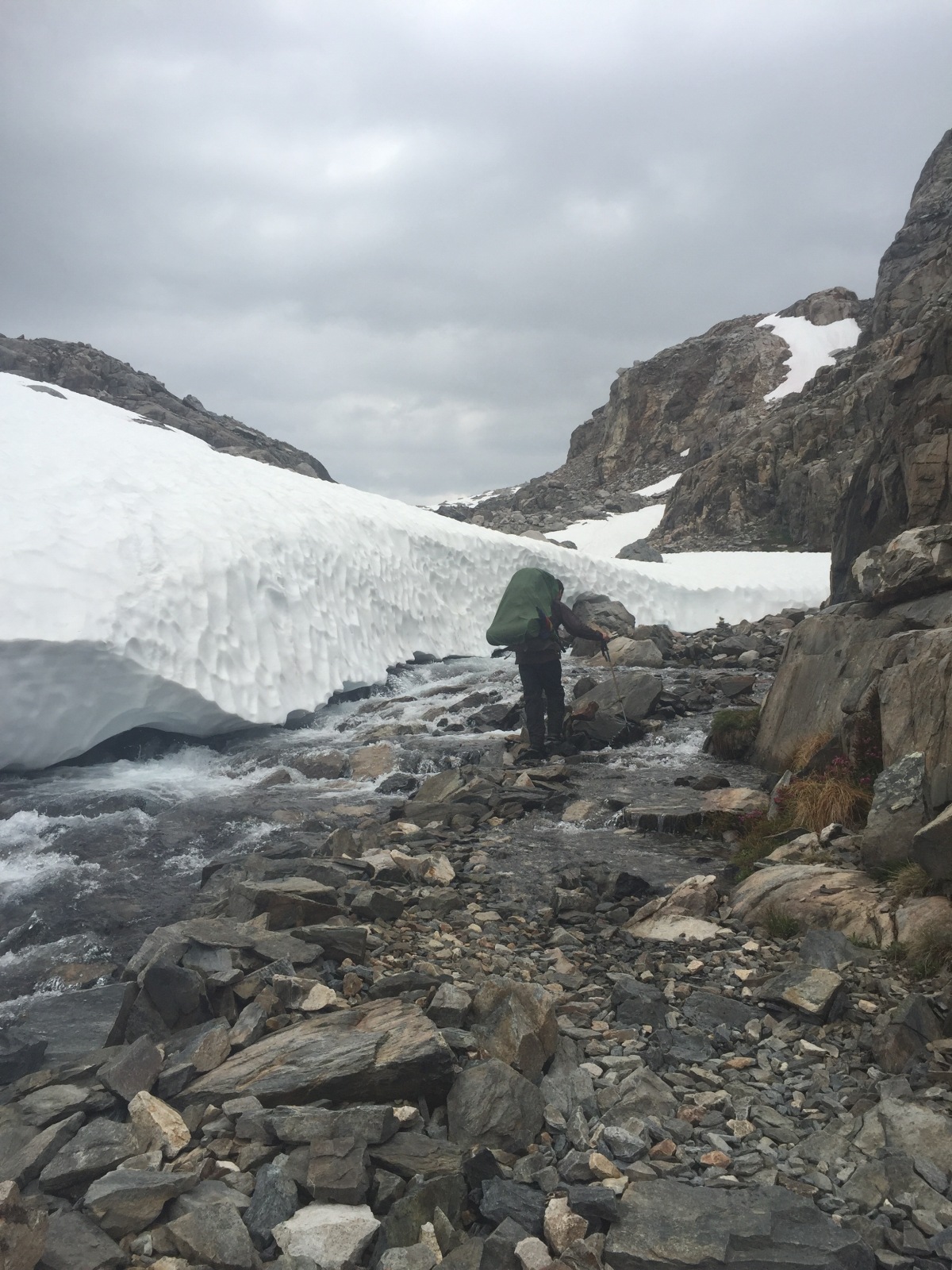 About a mile from the top of the pass we heard rumblings of thunder again, so we scurried up the final snowfield and made it to the John Muir emergency weather shelter before the rain began again. 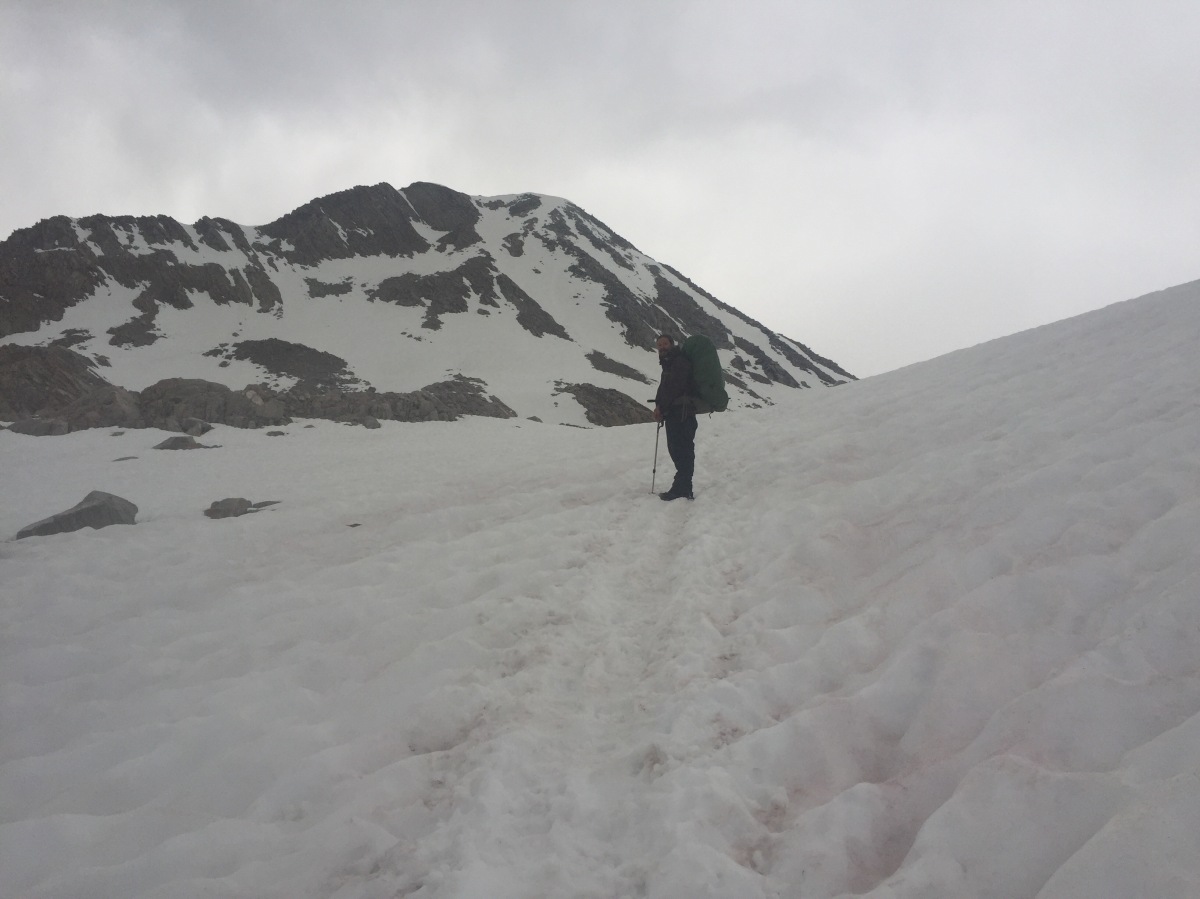 There were three other PCT hikers inside the shelter, which was surprisingly comfortable! It was about 5pm by the time we made it, and we decided to stay in case the weather worsened. We enjoyed good conversation, had dinner, and called it an early night. As we fell asleep it started to rain again, and we discovered that the roof leaked. Despite the drips, we had a warm and mostly dry sleep! The weather had cleared by morning, and we hiked down a couple more miles of snow before getting back to the actual path.

After the snow, we didn’t have any more passes to cross that day, but we did have a major ford of Evolution Creek. Evolution Creek is one of two of the most difficult water crossings on the PCT. When we got to the creek, it was about 60ft wide and at its deepest point it looked like it would be up to my rib cage. It’s hard to ford swift water when it gets above your hips. So Garrett crossed, then came back to get my bag and hook arms with me to help steady me against the flow. We made it across, and I was thankful to have him there to help me! Good thing I married him!

After the creek, the day was pretty flat and we managed to cover a lot of miles. We had been rationing our food, as we were starting to run low, and we were happy to find we were able to make it as far as we did that day! We had a final climb, then camped in a quiet spot amongst the trees. The next day we had one more pass, then mostly downhill to our next resupply!