We’ve spent the last week getting ready for the Appalachian Trail. It feels a little strange to be “getting ready,” for the trail, because sometimes I wonder what that really constitutes? You can have all the gear in the world, but if mentally you aren’t prepared, you’re not going to travel very far. I thought I was equipped for the Pacific Crest Trail, both mentally and gear wise, but was plagued by blisters for nearly 700 miles through the desert. I tried every method of blister treatment I could think of; various tapes, changing shoes, changing socks, elevating my feet at night to reduce the swelling, Advil & Tylenol, epsom salt baths. In Agua Dulce we found epsom salts, but being that the town only had a grocery store and a few restaurants, there was no place for me to soak my feet. Garrett went into the store and bought a gallon of water and a roasting pan, and I sat on the curb in the parking lot soaking my feet, feeling miserable, and wondering how I had gotten myself into this mess. And then I remembered that I alone had put myself into this mess; and it wasn’t really a mess, it was an adventure that I had been wanting for so long. Blisters weren’t going to stop me, many people go though things much worse on the trail, let alone in the greater world. And that is the thing about thru-hiking, it is a choice. Others are forced to walk similar distances all over the world in an attempt to survive. So while I may struggle somedays on the trail, I always make my way back around to being grateful for this opportunity to be able to hike for the joy of it, spend time in the outdoors, and to have the best companion along the way.

Feeling much better in Northern California, Mt. Shasta is in the background.

So in the days leading up to the trail I wonder what I’m not prepared for this time, what lessons are out there to be learned? Only time will tell, but I’d like to think that I’m more prepared this time due to my experience along the PCT. Even with a few pre-trail jitters, I’m excited for the Appalachian Trail. A lot will be different when compared to the PCT. I decided to swap out my old pack for a Hyperlite (it’s considered ultralight, and weighs only 2lbs- less than half the weight of my old pack!). After a lot of consideration, I’ve decided to hike in wool socks and Chacos (a hiking sandal). I backpacked 50 miles in the Grand Canyon with them, and feel pretty confident that I will have happy feet.

The Appalachian Trail itself is a different trail as well: 2,190 miles compared to the PCT’s 2,650. And although it is nearly 500 miles shorter, it has more elevation gain and loss than the PCT. The climbs also tend to be steeper. This is the type of hiking I cut my teeth on, so I’m looking forward to it (quick side note: I had to just ask Garrett if the expression was “sawed my teeth.” He also taught me yesterday while I was humbly bragging, “I don’t want to float my own boat or anything…” that that isn’t how people use that expression, and suggested perhaps I was going for “toot my own horn.”). While on the PCT we hiked through only 3 states, we were in California for about 1600 miles! On the AT we’ll pass through 14 states, with ~550 miles being the most miles hiked in one state, Virgina. East coast vs west coast, desert vs forrest, and those are only a few. 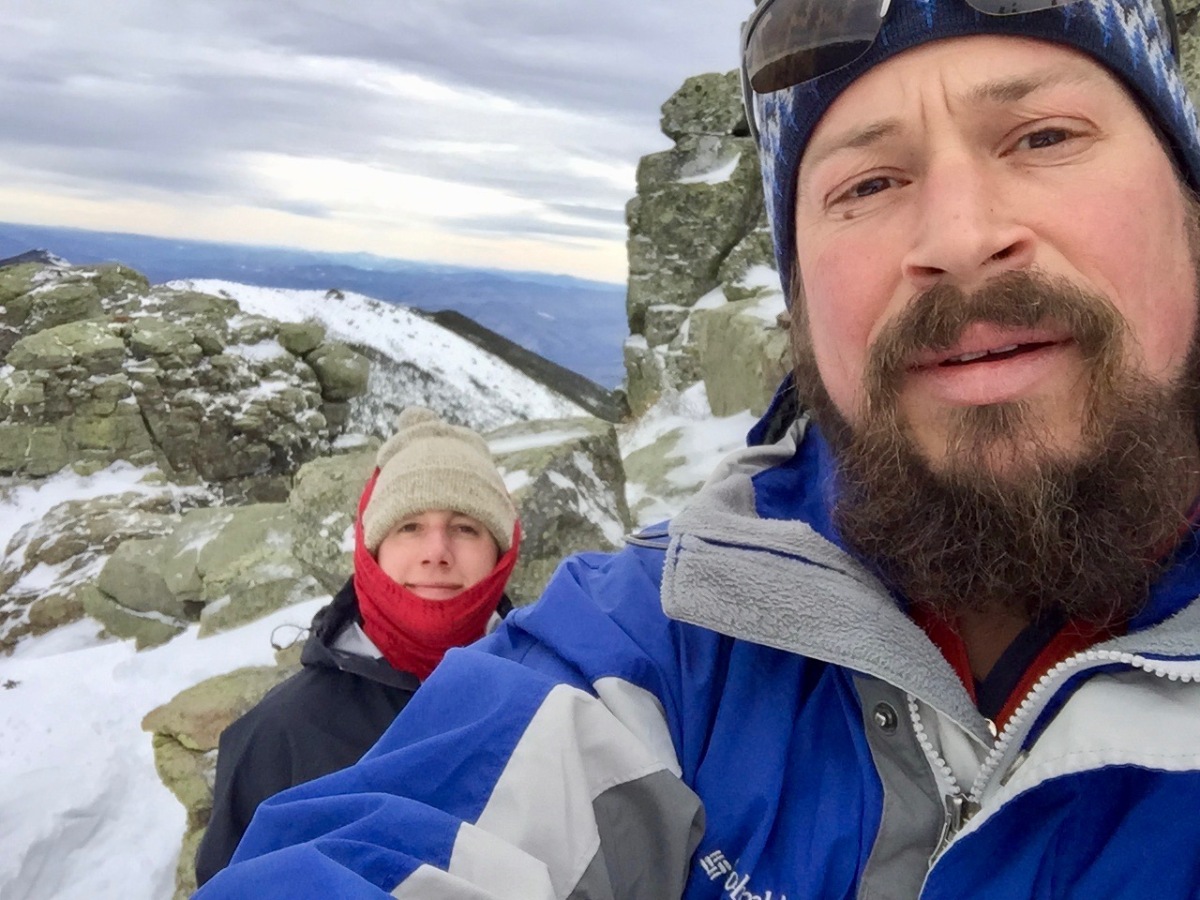 Franconia Ridge, along the AT in New Hampshire a two winters ago.

Garrett hiked the AT in 2011, and I’ve hiked a 300 mile section of it in New England; not to mention we both have lived on the AT in New Hampshire and a few miles from it in Maine working for the AMC, plus the countless hikes we’ve done together since we’ve known each other. Whereas, when we hiked the PCT we had never stepped foot on it until we started, it really felt like stepping into the unknown. The other big change is that we aren’t doing maildrops like we did along the PCT. We spent weeks scouring for good deals and packaging 24 mail drops, supplementing with 4 planned resupply stops where we were going to source all of our food from a particular town. We knew that there were pros and cons to this plan, but I really underestimated how many calories I would need and how tired I would get of “bars,” the catchall-phrase for granola, energy, fruit & nut, etc. bars. The Appalachian Trail passes near towns more readily than the PCT, with actual grocery stores, so this time we decided to just resupply as we go along to give us more flexibility and variety in our stops. Oh, and we’re bringing a stove this time! Hot macaroni & cheese instead of watery gooey noodles? Yes, please!

So, our bags our packed, I’ve thought about the challenges we will face, and I feel as ready as I’m ever going to be! I picked-up our rental car, gave away a red cabbage thats been languishing in our refrigerator, repacked my bag one more time, and now am caramelizing the last of our onions for a dinner frittata that is using up the last of our eggs, too. I thought I might put a recipe in here, but since we’ve been back I’ve been relishing cooking without much structure. We just had friends over for dinner, and I followed two recipes. The first for the best baked spinach (although you can use any type of greens), and the second for magic bars. I love magic bars, other places they are known as seven layer bars. We have a few left over, which are going in our packs for the first days of the hike!  Georgia, here we come!

Not bringing the cat.