We had a wonderful day out of Daleville. The trail rolled gently out of town, and we crossed the Blue Ridge Parkway a few times. The foliage was completely out, blanketing the entire forest in bright green. Combined with bright blue skies, it was a beautiful day to be out in the woods. The day before we left town a fellow hiker asked us to check at our motel for a letter he missed. He was heading out that day, and we were heading out the next morning, so we told him we’d check and if it was there we’d carry it with us in case we saw him again. We thought that it may take a few days to catch up with him, but we found him that afternoon after he had taken a long nap. He was happy to have the letter, which made me happy we checked.

We stopped for dinner at a stream, after which it was a quick three miles to the shelter where we bumped into friends and found space in the shelter. We listened to the last episode of S-town, too- which we had been looking forward to for a couple of days.

The next day we covered the first seven miles in good time, but then we started a long climb up to the top of Apple Orchard Mountain. We slowed a bit, and decided to stop at 18 miles where there was a shelter. The weather report said there would be heavy rain starting around 7pm in the evening, with showers starting late afternoon. When we arrived at the shelter though it was full at 3:30pm. We decided if we were going to have to set up our tent we might as well hike some more. With the sky darkening we eeked out three more miles through a forest full of pink trillium and set up camp. We almost had dinner made before it started to downpour. We made do, and hopped into the tent to stay dry.

It rained until about 8am the next morning, so we stayed in the tent a little longer to stay dry. We started hiking thinking it would clear, but a cold rain started to fall an hour later. We hiked fast to stay warm, and the rain stopped for a good a little before noon. We made it to Matt’s Creek, which normally is a rock hop or a shallow ford, but the inch of rain that fell overnight made it a raging torrent. We met Geordi there who was trying to figure out a safe way to cross. We’ve crossed rapidly moving or deep water in the Sierras with out any incident, but this water at least knee high on Garrett and moving faster than we’d ever experienced. He felt it would sweep him off his feet. We looked for alternative places to cross without any luck. We were getting ready to camp out and wait until the next day when the water level should have dropped, but Geordi found a downed tree just long enough to span the narrowest part of the creek. Garrett and him moved it into place, and found another tree to stabilize the crossing; enabling us to make it to the other side. We were happy to keep hiking! We made it to the James River, where fortunately there was a 1,000 foot long bridge to help with the crossing.

We took a two hour break in the parking lot on the other side of the bridge to eat a late lunch and dry out our things from the wet night and day. Afterwards we hiked a few more miles, and then stopped to get water when we realized there wouldn’t be anymore for about 10 miles. We had an early dinner, then continued up to the top of Rocky Row. Just before the top we saw a snake. We thought it might be a Copperhead, but upon further investigation we now think it was a non-venemous Milk Snake.

We set up camp a couple miles later, and enjoyed a quiet night atop of the mountain. It’s been a long time since we’ve set up the tent at all, let alone two nights in a row, so it felt especially peaceful in the quiet of the sunset. 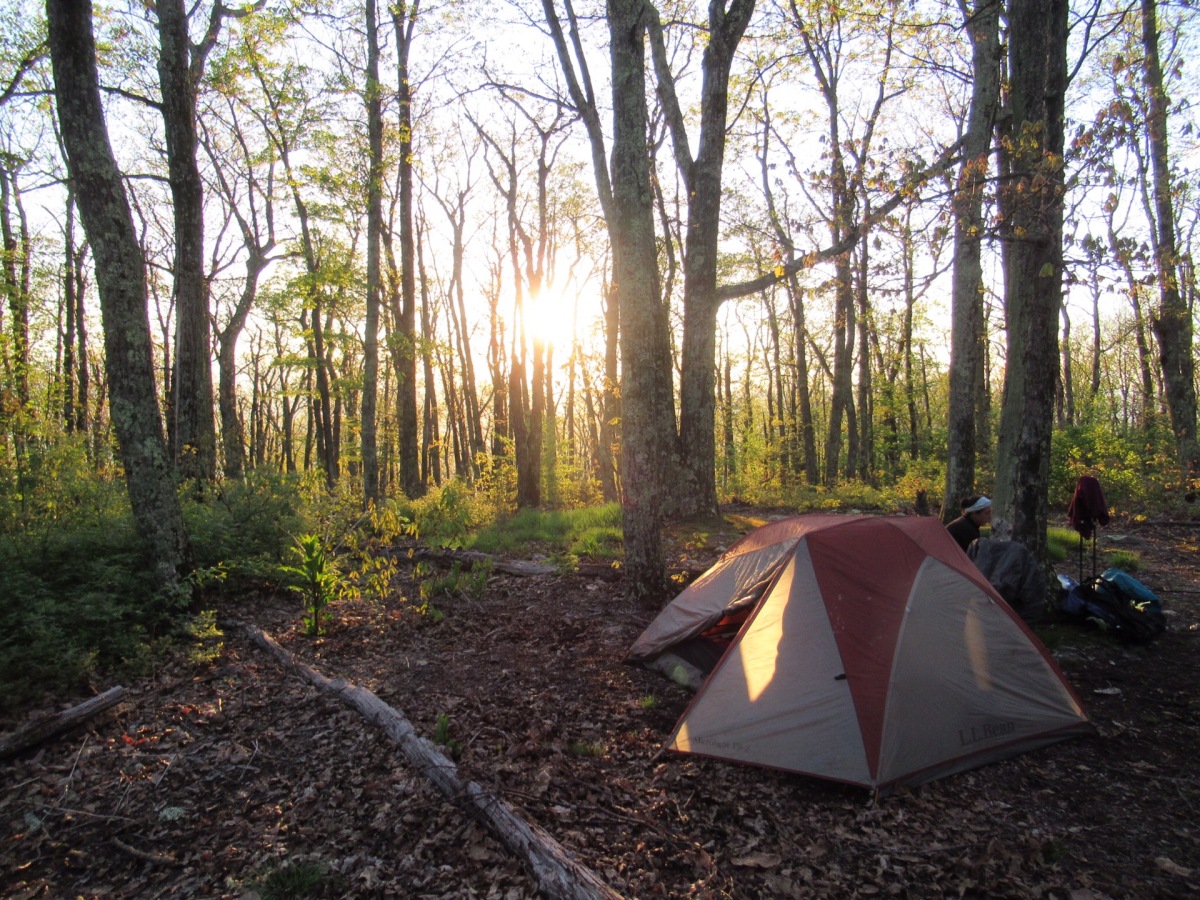