Bear’s Den Hostel in the distance.

We had a slower morning getting out of Bear’s Den Hostel, pancakes will do that. They are “make your own,” but the hostel caretaker gets the griddle hot and supplies ready. I offered to make pancakes for everyone who was up, and enjoyed drinking coffee and casually flipping pancakes. We finally ambled out around 8am, not quite sure what our plan was. Harper’s Ferry was 20 miles away, and we wanted to stop at the Appalachian Trail Conservancy Headquarters. They closed at 5pm, and we didn’t want to wait around until 9am the next day when they opened again. By lunch we were in a good spot to get there by 4:30pm if we kept a 3 mile/hour pace. So we took off!

Along the way we passed out of Virginia and into West Virginia for good, we had crossed in and out of West Virginia earlier in the day. I also stopped to take a picture of an orange toad- which upon some research turns out was just an American Toad, sometimes they can be that color apparently (or just mad!). We made it to the Shenandoah River, and crossed the footbridge into Harper’s Ferry with time to spare. We had our picture taken at the ATC for the hiker book, and received our hiker numbers (260th & 261st) indicating how many other hikers had passed through attempting a thru-hike heading north this year. 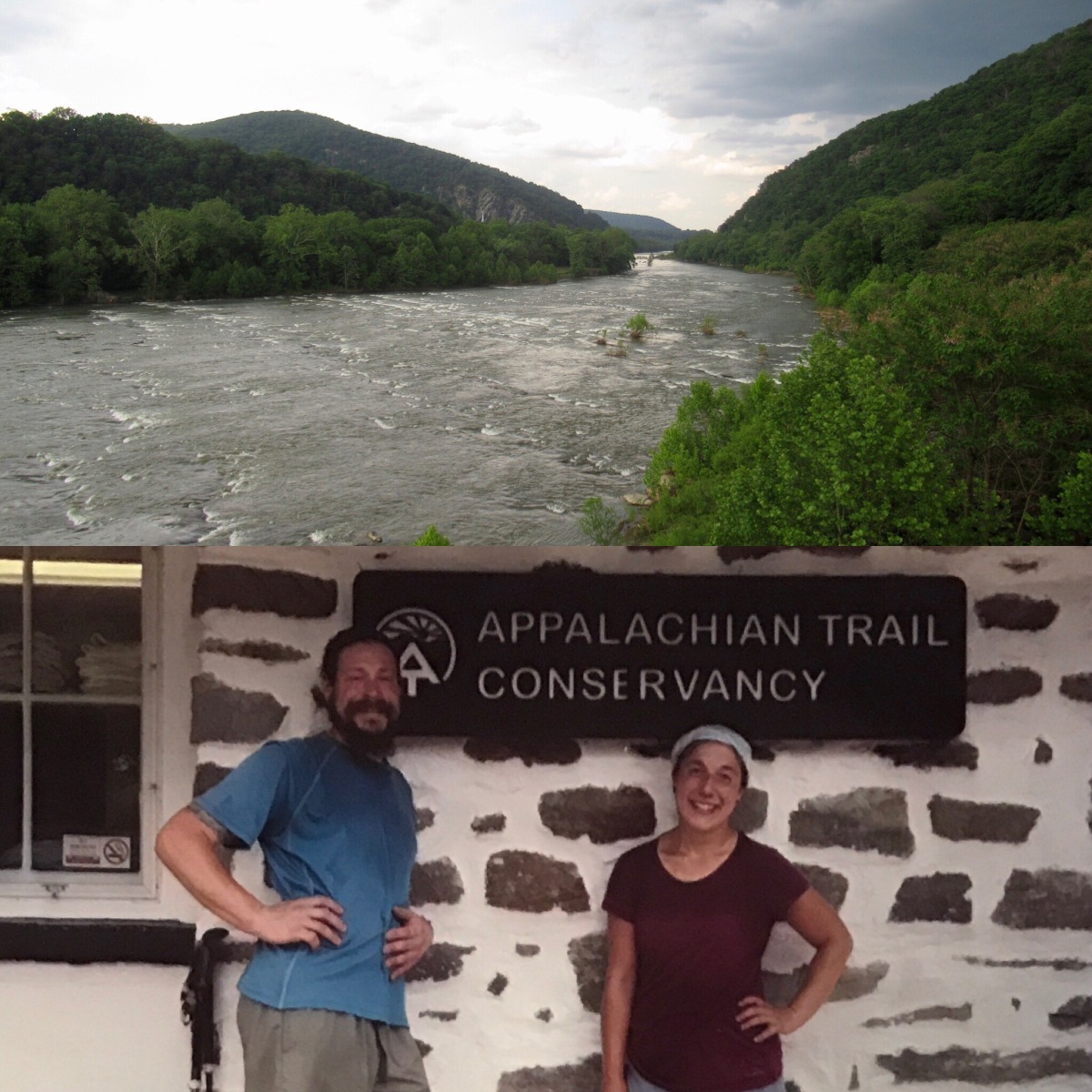 Harper’s Ferry is the historical midpoint of the trail, and although the actual midpoint is now a bit further north, it is a place for celebration. We hadn’t planed on staying, but it started to rain, so we quickly decided we might as well and checked into the Econo Lodge. We’re spoiling ourselves with two nights in a row with a bed! As much as I like sleeping outside, it’s hard to beat soft sheets and pillows.

The next morning it was out of West Virginia and into Maryland, crossing across the Potomac River on a foot bridge. The AT follows the C&O canal bike path for a little over a mile. I’ve actually biked this section of the AT back in 2012 when I led a group of teenagers from D.C. to Pittsburgh, so it was neat to be back. We should have walked the mile quickly, but we lingered to take photos of a snapping turtle, then more turtles (so many turtles!), and geese and goslings.

We climbed up to the ridge, and the path stayed level for most of the day. We stopped at a nice campground with showers for a snack, and an isolated storm passed over us. Fortunately we took cover under the showerhouse awning, and soon we were on our way. We ran into former thru-hikers in a park a few miles before we’d planed on camping, and they were doing trail magic! The fresh fruit and cookies made the last few miles fly, and soon we were at Pine Knob Shelter. It poured that night, but we stayed dry in the shelter.

The next day was cool with no rain, and we continued into the last bit of Maryland. We had a snack break at Pen-Mar Park right at the border (we found more trail magic there, too!), and then it was into Pennsylvania! It was exciting to be back in my home state! We stayed at a double shelter, the first we’ve seen, and met the shelter cat who hangs around (also the first we’ve seen). The shelters were crowded with a Boy Scout troupe, and there were many people set up to camp, but we managed to take the last two spots in one of the shelters. After our longest day yet on the trail we were tired, so we had no problem falling asleep despite all the campground noise. Looking forward to seeing what else Pennsylvania has in store!