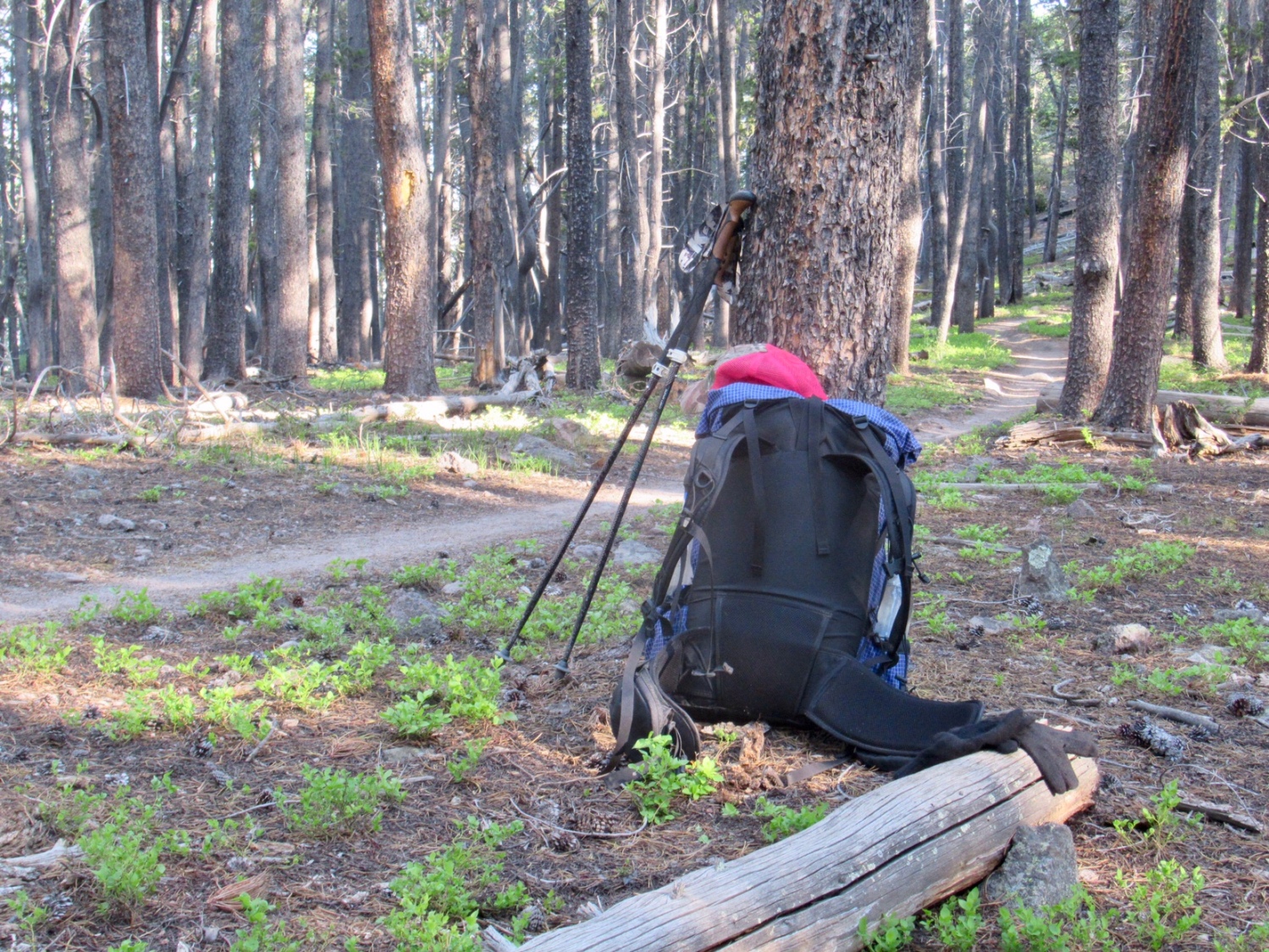 When we had gone to bed the night before, we weren’t sure if we were going to make it to town the next day. We had covered a few more miles a day than we had anticipated, so we had plenty of food to stay another day and a half in the woods. It’s often beneficial to get to town in the morning after a handful of miles for second breakfast. Often times we can find a hotel to check into if it’s a weekday and they weren’t full the night before, so you get all the benefits of feeling like you’ve spent a whole day in town, without having to spend money for two nights in a hotel if you’d arrived late the day before. 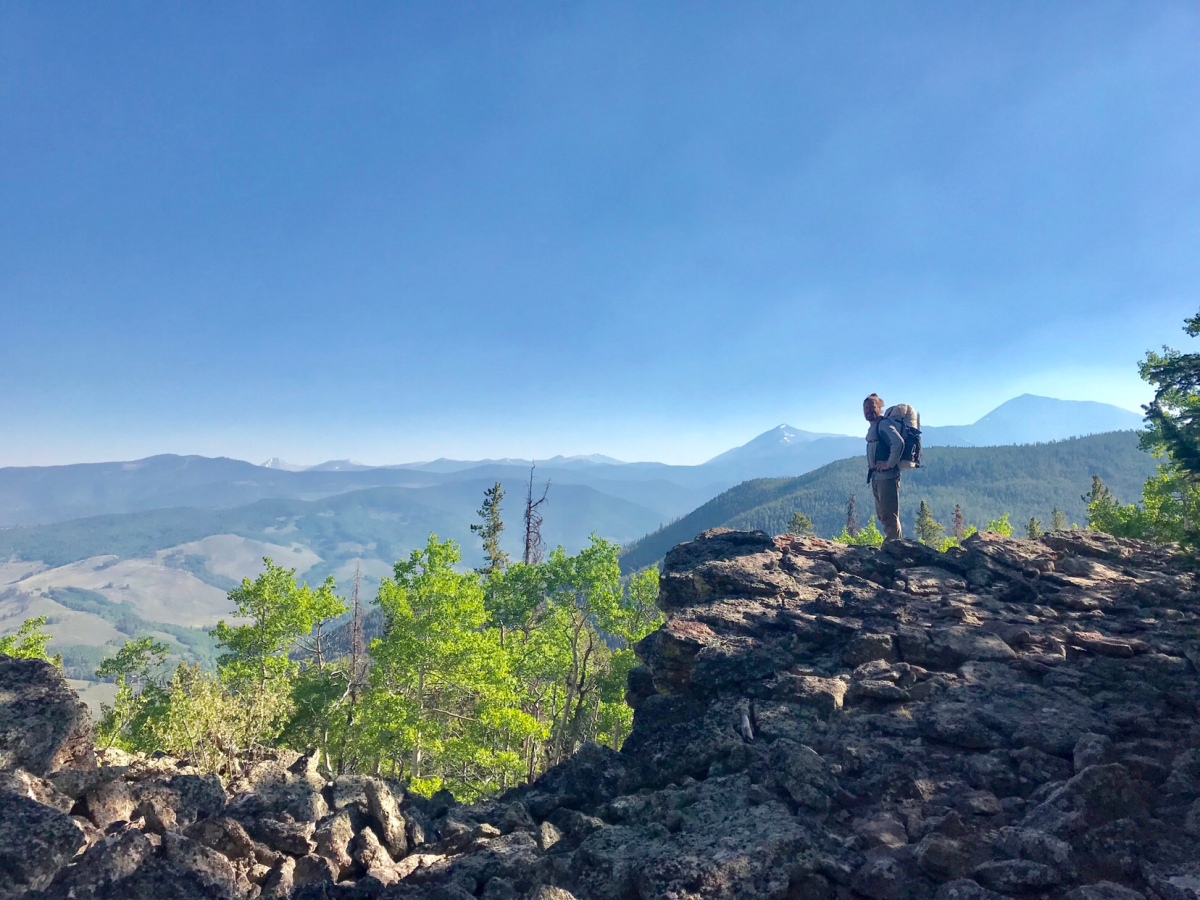 The day started with a long climb up to the ridge, but once we were there, we stayed there for most of the day. We entered an area referred to as Monarch Crest, which is popular with mountain bikers, unbeknownst to us. It was a Saturday, and the last three quarters of our day we were bemused watching packs of mountain bikers out for the day, speeding down the trail. Technically, bikers are supposed to yield to hikers, but none did. It would be easy to get annoyed with the situation, but there wasn’t much we could do, and fortunately this was the first and hopefully only time we’ll have to deal with such a popular biker area.

We stopped for lunch after about 12 miles, and it was clear we’d have plenty of time to make it to the pass. We saw our first CDT hiker of the day, Gasket, and he stopped to eat lunch with, too. Afterwards, it was another short climb, then we rolled along open ridge to the road. 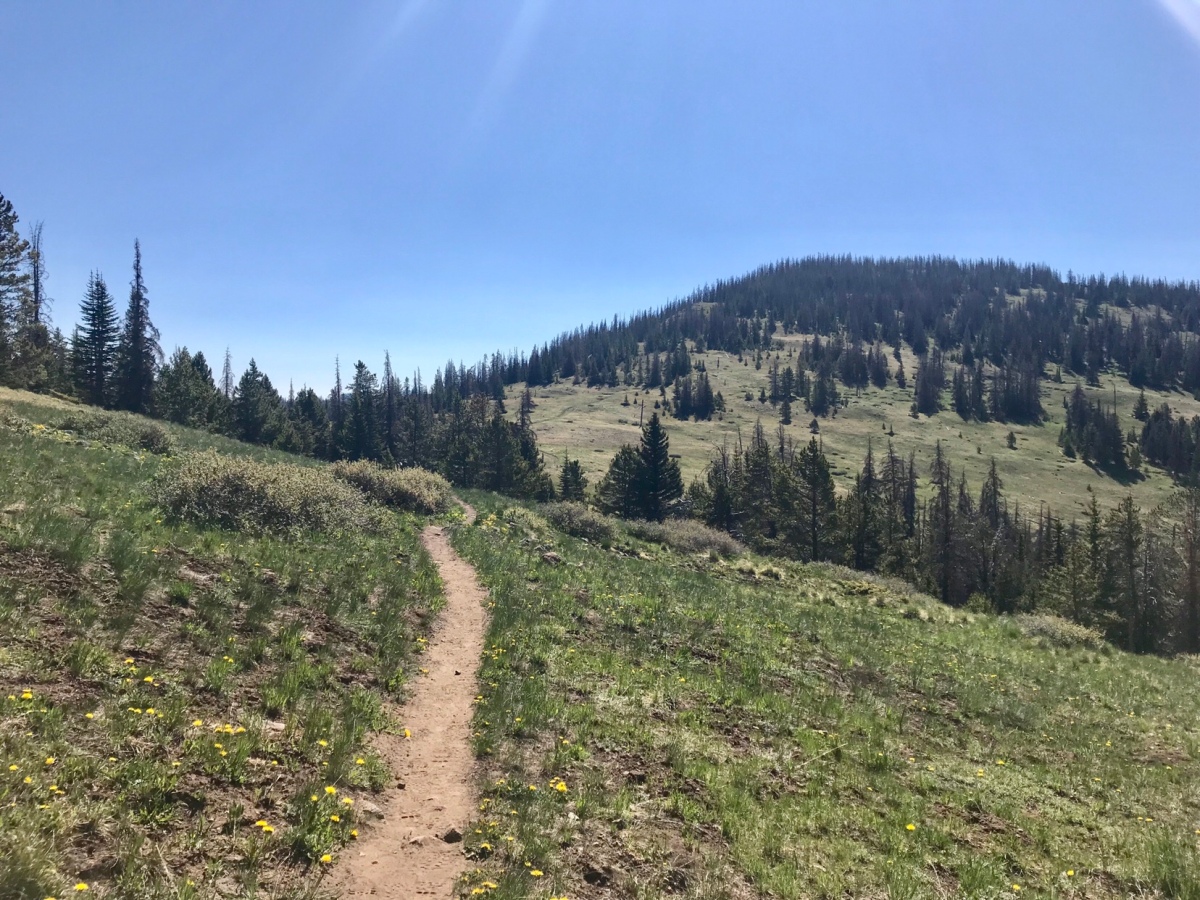 We were passed by Hyrobics a half miles from the pass; she said she’d been following a pair of New Balances and Altras all day, and she had been wondering who the tracks belonged to. As hikers, you start to recognize other hikers tread. You know if there is someone in front of you you’ve not met before, if there is an unfamiliar print on the trail. My steps are distinguishable, despite the fact I wear a popular shoe, from the fact that they are small and my feet point out. Garrett’s honeycomb patterned New Balances are an unusual tread, so our combo is noticeable. 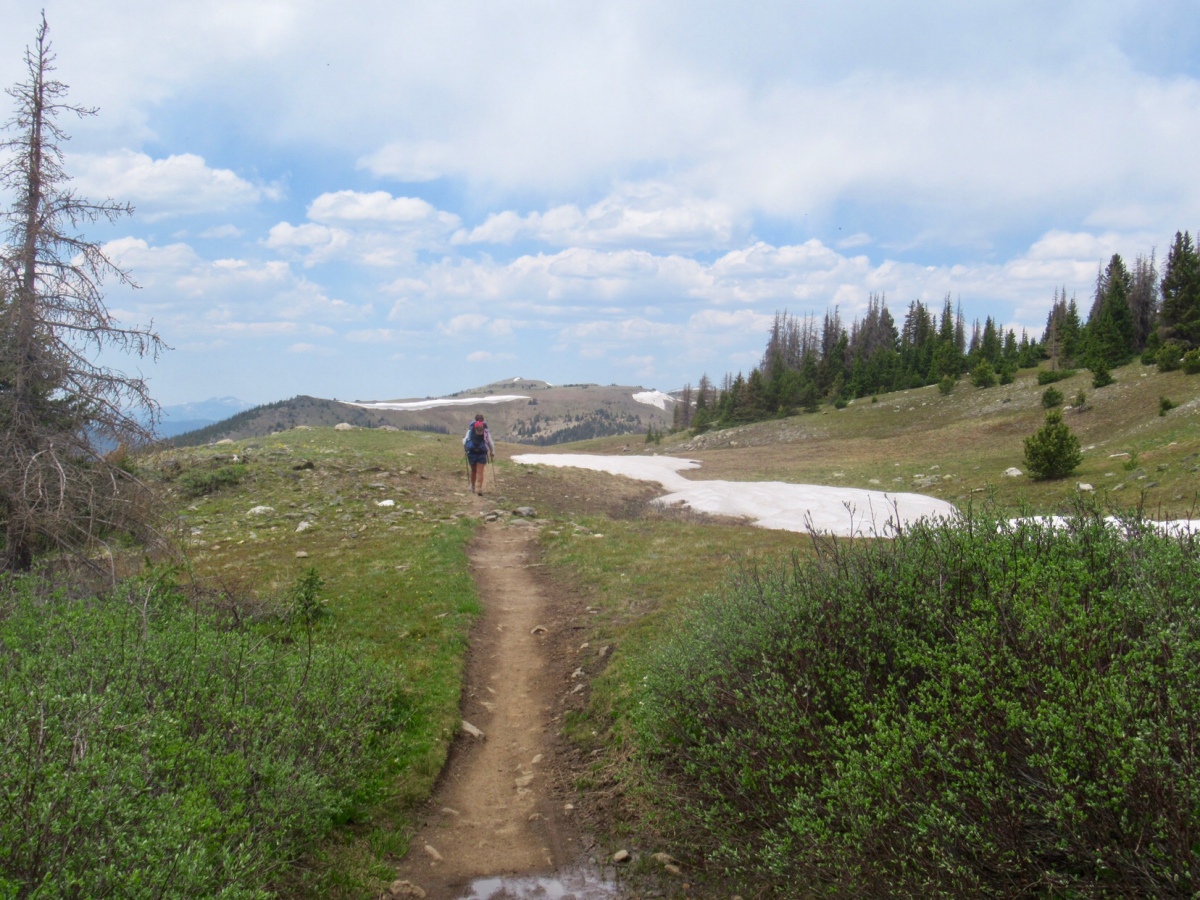 At the pass is a family run souvenir and snack shop, and at 5pm on a Saturday there were a few cars there. We went in to buy a drink, and while I was looking around the store Garrett asked a family if they would give us a ride into Salida. They agreed, mostly because they said he was traveling with his wife, good thing I showed up soon after! The ride into town was longer than expected, the 20ish miles winded down from the pass, but we we made it to a hotel eventually. We ordered pizza, and cleaned-up, happy that we made it to town in relatively short order.

We had to wait for the post office to open on Monday, we sent a box to Salida with food from Twin Lakes and my snow equipment. After seeing hardly any snow again on this past section, Garrett decided to send home his equipment, too. So Sunday was spent walking around town, eating, and relaxing. Salida is a cute town, and there was plenty of food options (all with fresh vegetables!) to choose from. 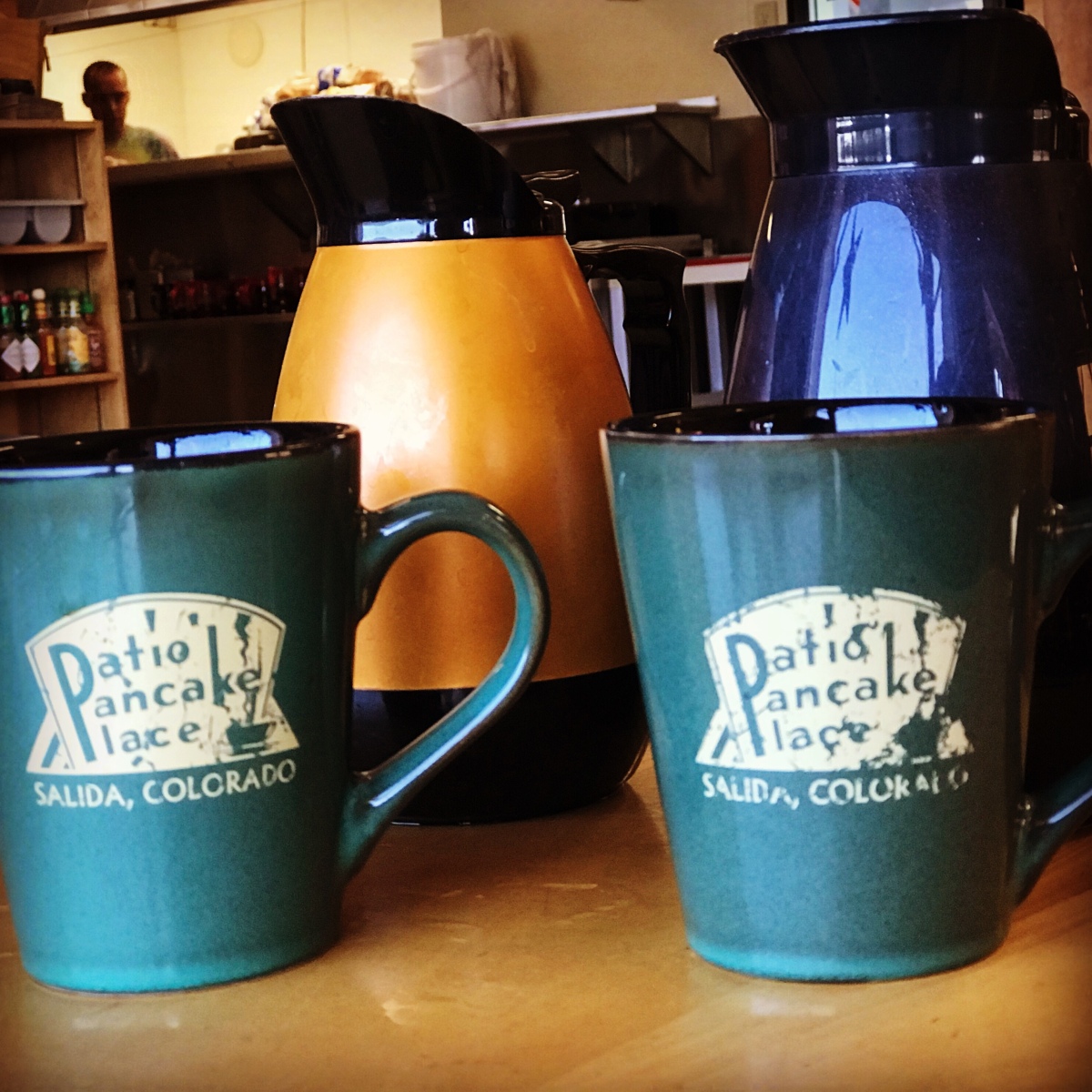 Monday morning was our errand day, and we decided instead of rushing to get them done in the morning, we’d take another day off. My left ankle had been bothering me, and my legs have been particular sore on this section, so another day of rest seemed like it would be beneficial. We ran into Gasket at lunch, and he told us that there was a fundraiser for the Continental Divide Trail Coalition at the brewery down the street from our hotel that evening, so we had something out of the ordinary to do our last night in town.

The fundraiser was fun, with music playing, and a few quick talks from people involved with the trail. They had a nice selection of non-alcoholic drinks for me to imbibe, and delicious Mexican food from a stand outside, too. I even met a thru-hiker from last year that agreed to give us a ride back to the trail the next morning, making the event a complete success!