Day 38 we filled-up our water to make it the 20.5 miles to Walker Pass and our next water source. We had a big climb in the morning, and were happy to find that afterwards the trail was mostly flat for the rest of the day, until our gradual descent to Walker Pass Campground. We had eaten half of our food by now, so despite the gallon of water I carried, my pack didn’t feel as heavy as it had the last few days! I took a major afternoon snooze mid-day, while Garrett did yoga and played with the camera on my phone to give you these keepers: 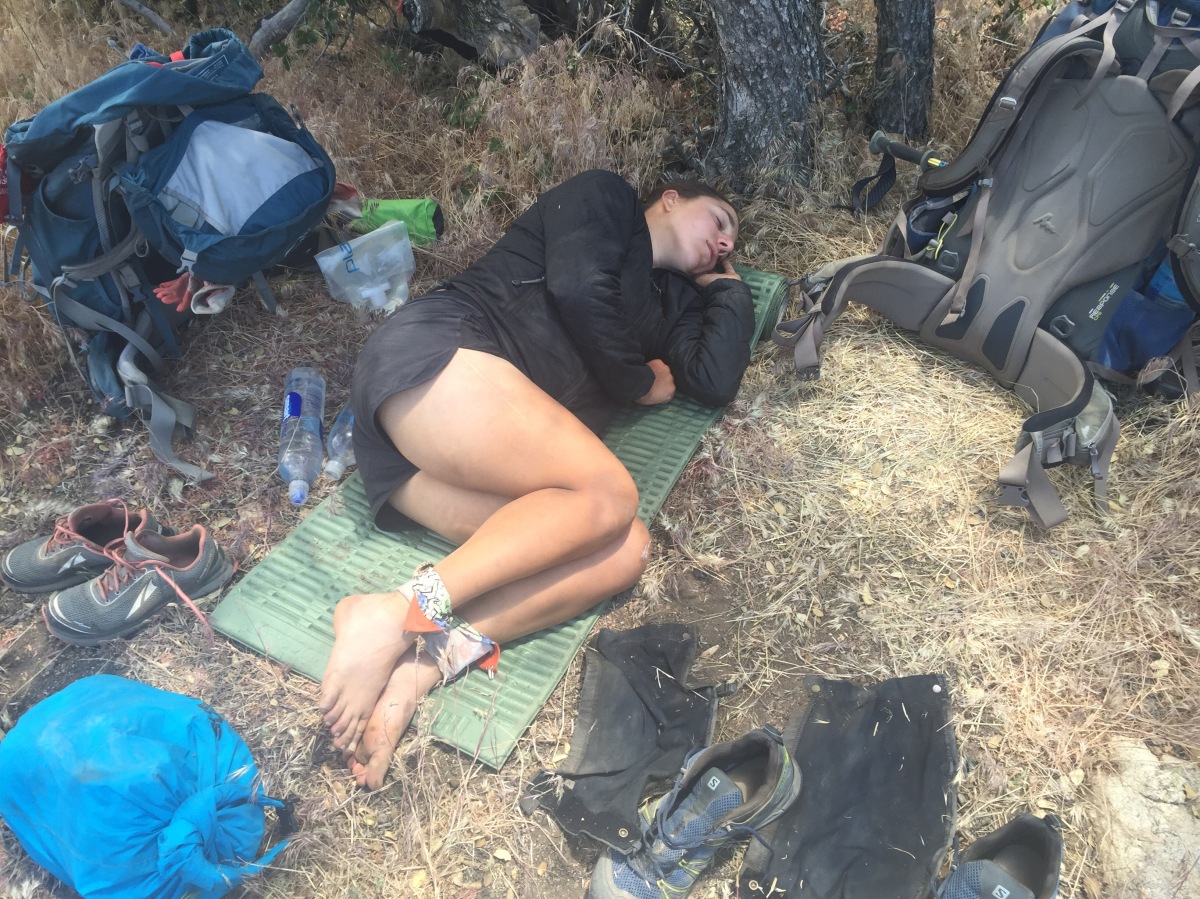 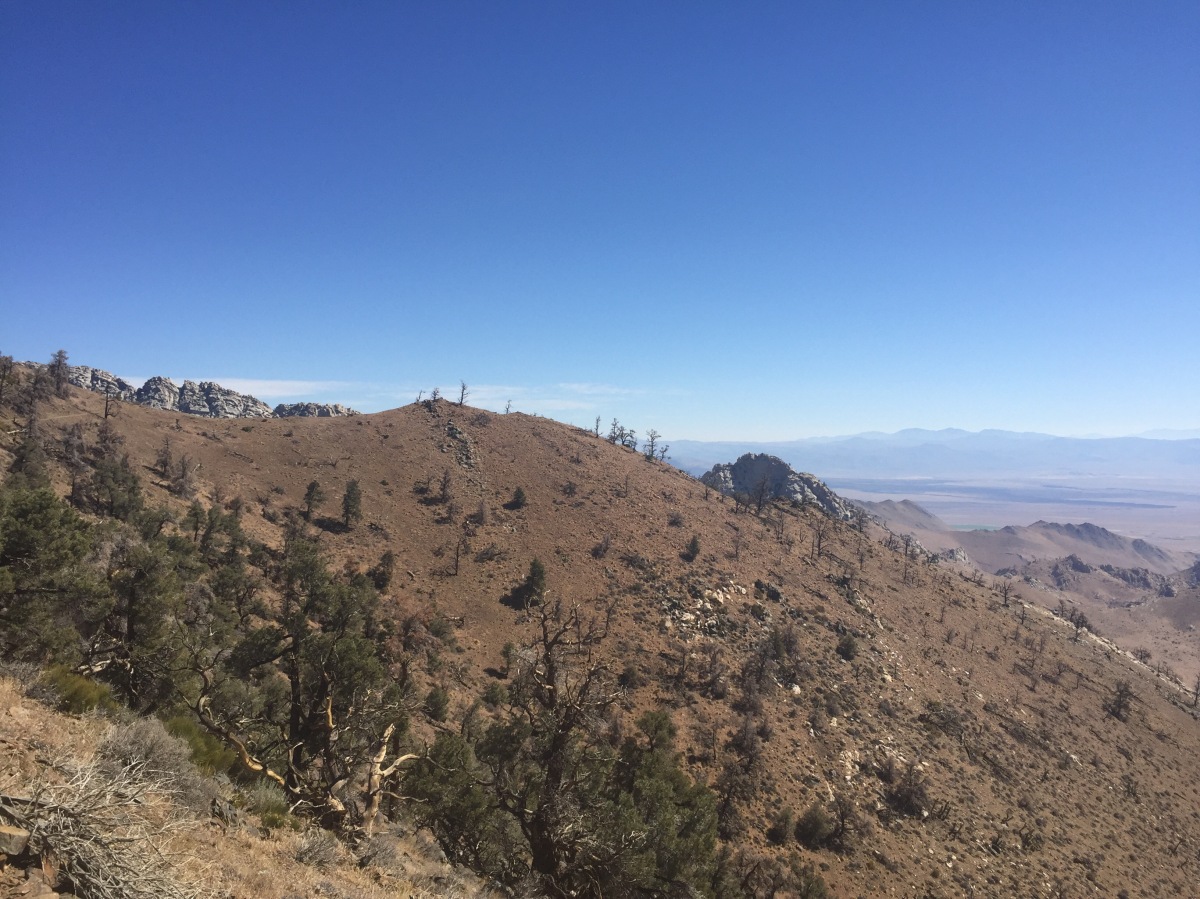 We dropped down into a valley later in the day, and made camp in a space for one tent under a tight canopy of trees. Where we camp depends on where the water is that day, how tired and hungry we are, and availability. Most of the times we make camp in small spots off trail that look like they have been camped on before (some of which are marked on maps). Other times we use bigger, more established primitive sites near popular spots (like water sources) with spaces for more tents. And rarely we find ourselves at pay to stay campsites with facilities, but those are few and far between (especially as we’ve headed into more remote areas). Our spot that night was small, and we stopped a little earlier than we normally would’ve because the map showed a steep upcoming climb that was heavily switch backed- so the chance of finding another spot in the next couple of hours was slim. A thru-hiker called Wrench soon arrived, and asked if he could cowboy camp (just sleep in his sleeping bag, no tent) behind our tent. We were surprised to have company in our little spot, but enjoyed talking to him and sharing the pretty space. 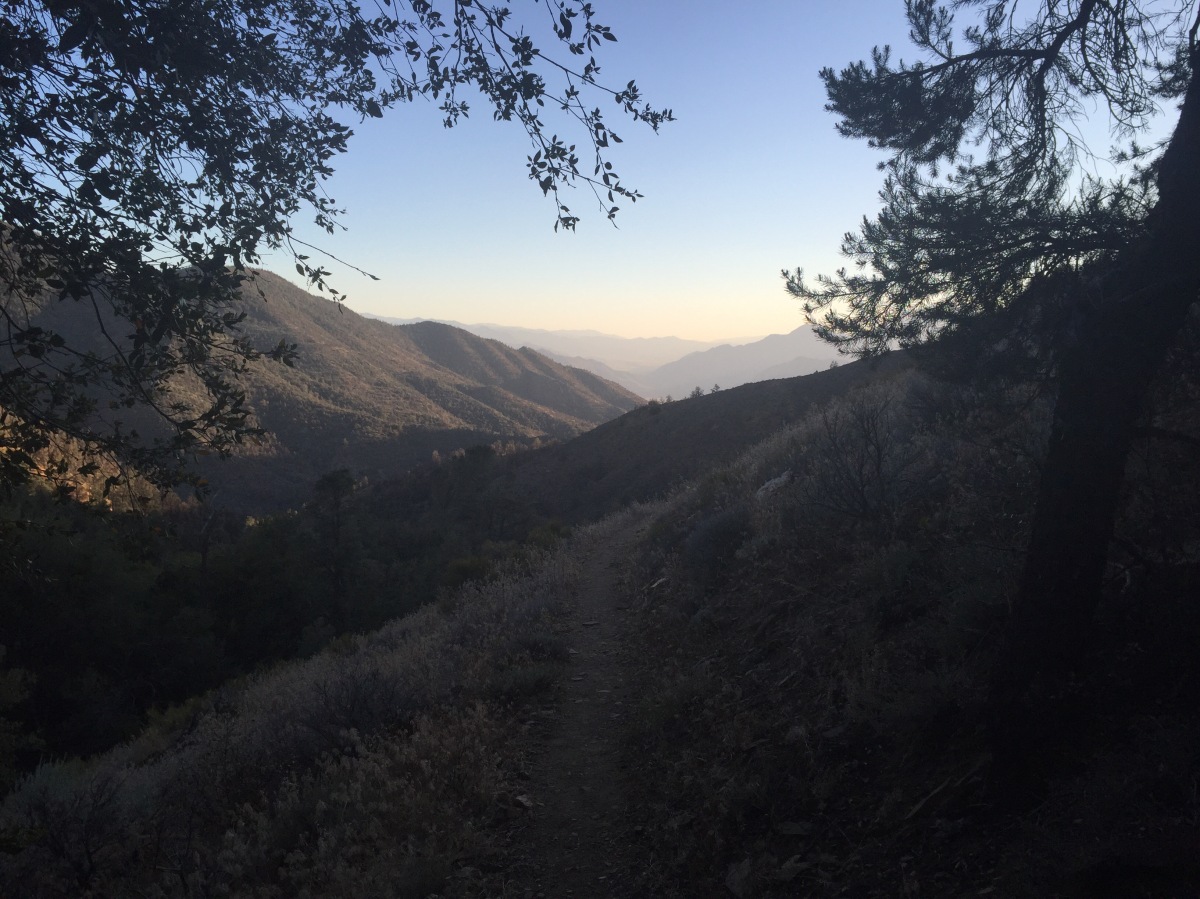 Day 40 was exciting, as it was our last full day before reaching Kennedy Meadows, the gateway to the Sierras and some much needed time off. Before we left Mojave nearly a week earlier, we had arranged with my brother Drew who lives in Los Angeles to rondevouz in Kennedy Meadows. My feet are improving, but not as fast as I would like. One blister heals, and another forms! We considered staying a few days in Mojave, but there wasn’t much there, and I felt confident I could make it to Kennedy Meadows if a few days off could come after.

Waking-up on day 41 felt a bit like Christmas morning. I was excited to see Kennedy Meadows, to see Drew, and get new shoes! We had sent our food and boots to the general store at Kennedy Meadows in a few packages, but they charge a $6 fee per box; so we sent additional supplies to Drew once he said he was able to meet us. Since there was little phone reception between Mojave and Kennedy Meadows, we were on a strict schedule to average 20 miles a day to meet him by noon that day. We made it in a little after 11am, and were greeted by the customary celebratory cheers from other hikers who had made it before us and were enjoying snacks and drinks on the porch. We joined them with well deserved provisions of our own, and ate them with relish as we had finished all but a granola bar and a handful of trail mix in our packs over the last seven days.

Drew arrived right on time, and his car was full of supplies for us! We got our bear cans, which are necessary for food storage over the next 312 miles, along with assorted items like more Advil, powdered Gatorade, and cold beer (to be drank immediately, not later on the trail)!  I also had five pairs of shoes sent to him, as my feet are now too big for the boots I had sent to myself before we left. 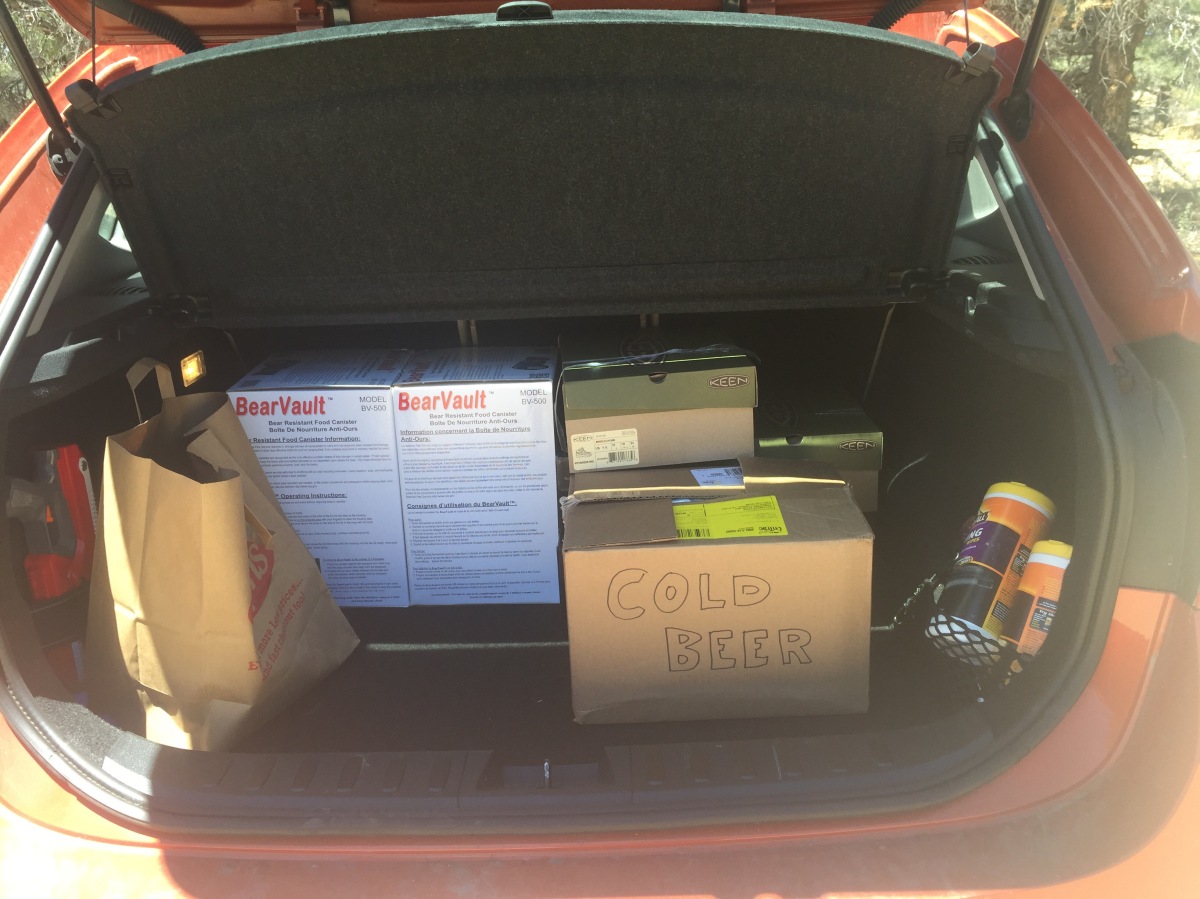 Fortunately, a pair of Keen boots I had sent to Drew fit, so we didn’t have to drive for hours to find an outfitter (Kennedy Meadows is tiny, population 200 people, with only the general store and Grump Bear’s Cafe). Instead, we had time to catch up with fellow hikers, grab lunch with Drew at Grumpy’s, and then he drove us about an hour to the closest town, Ridgecrest. We got sushi for dinner, and he took us to the grocery store to get a bit more food, and Epsom salts for me to soak my feet in for the next few days. While he had to leave the next day due to prior commitments, he offered to drive back out the two hours three days later to drop us back off at the trailhead. He has been the best trail angel so far, which just adds to his aura of awesomeness which he exudes daily! Thanks, bud!

So we’ve spent two full days off, and have one more! It’s hard for me to sit still normally, but I’m doing my best to treat my feet and it seems to be working (fingers crossed!). Drew will be back tomorrow to join us for one last town dinner for a long while, as we are planning on hiking for ten days before we pick-up a maildrop at a small backcountry resort in the Sierras, and then it will be another ten days or so before we resupply in a town. There are other opportunities to hike out of the Sierras to access other towns, but hopefully we won’t have to- as we’re looking forward to immersing ourselves in the beauty of the Sierras for the next three weeks! 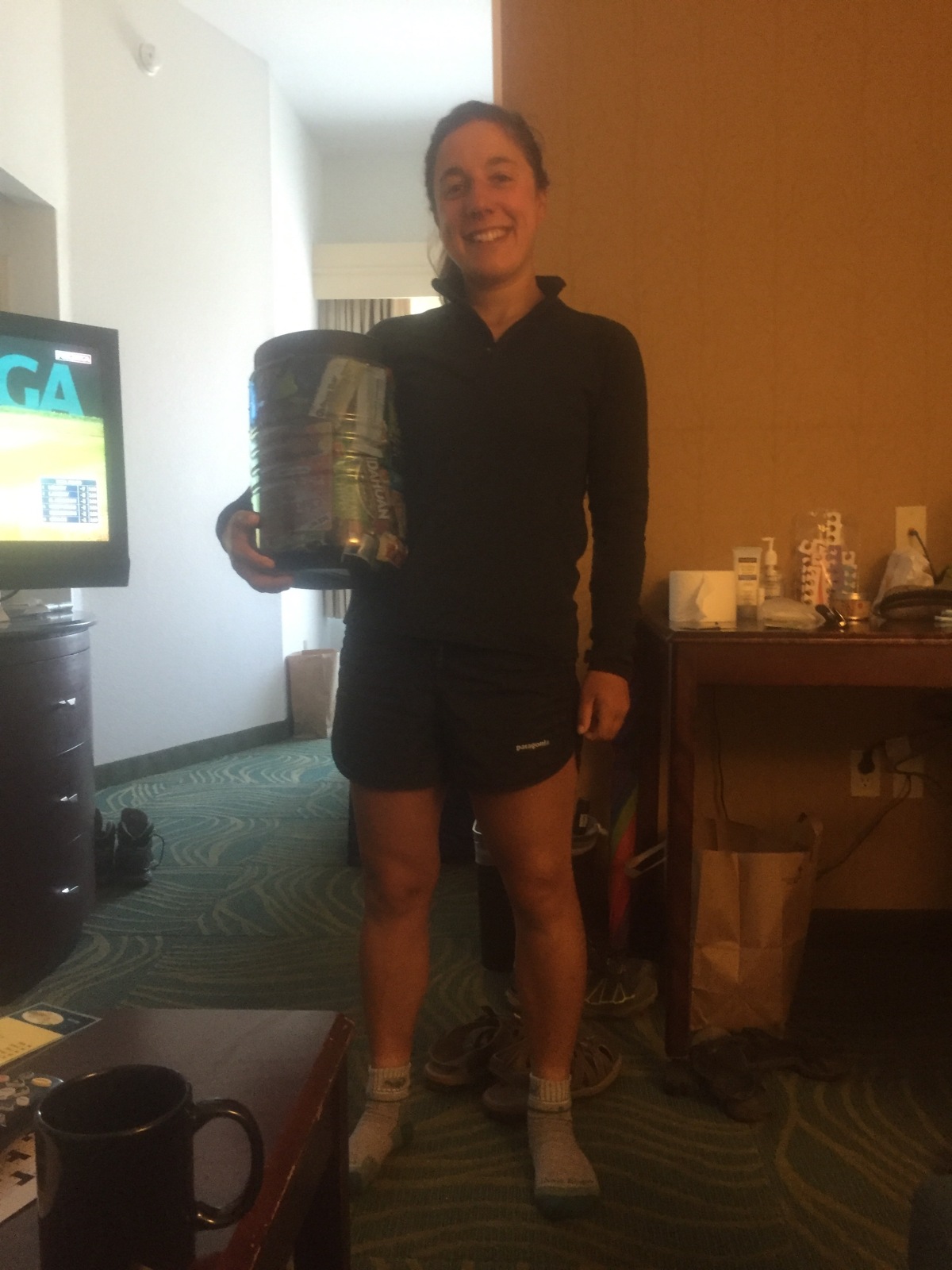 me with my bear can