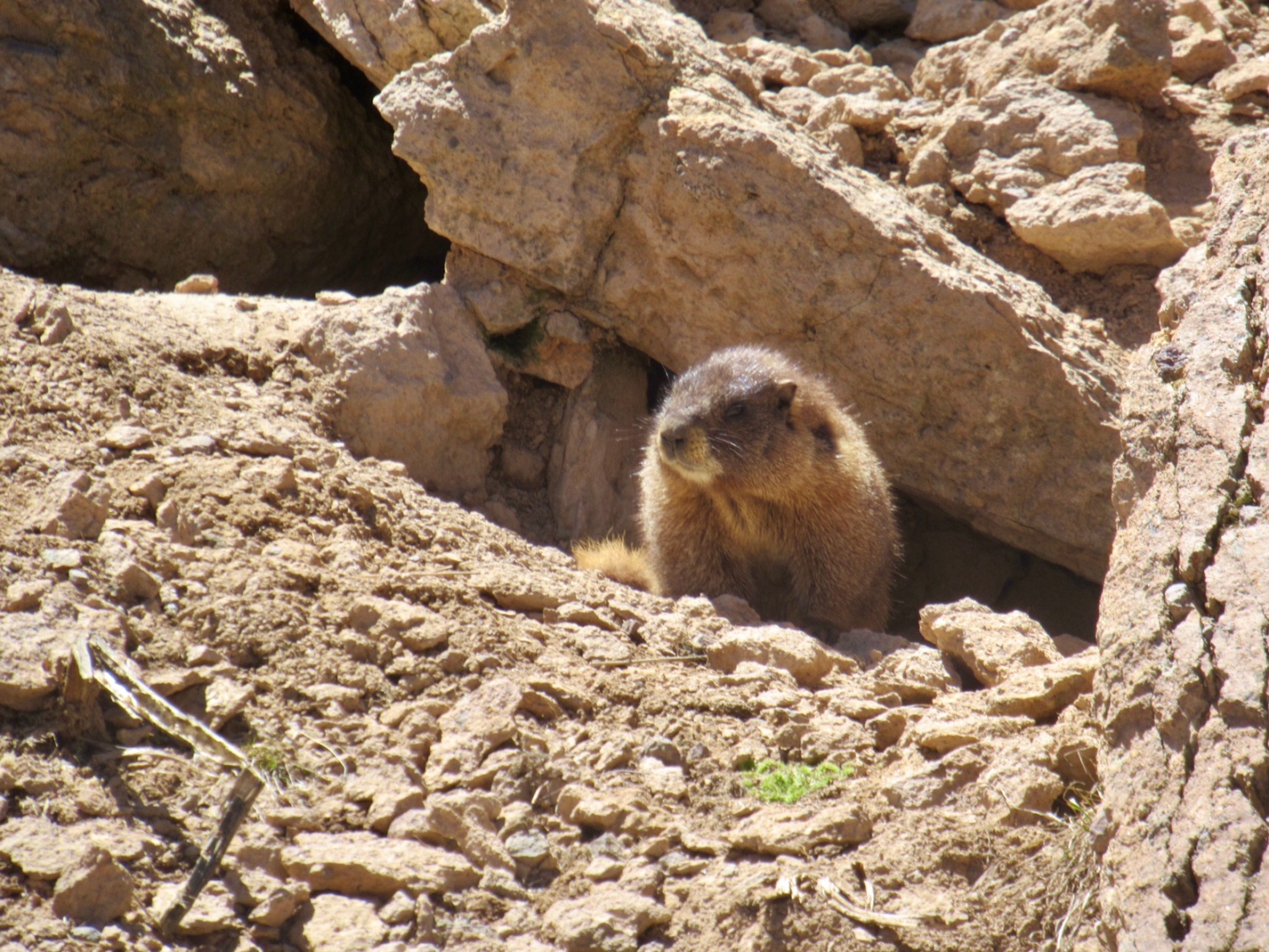 I finally had a comfortable nights sleep in our hotel bed, and as always, it was a little harder to wake-up the day we are leaving town. I peeled myself out of bed, and groggily headed over to Fina’s for what would be our third breakfast there; however, it was closed for an emergency. It’s hard running a small restaurant, and I totally understand. We looked at our watches, it was about 25 minutes before either the supermarket or Chama Grill opened at 7am. We went to the gas station for coffee, and hoping to find maybe a donut, but just succeeded with the coffee. We bided some time, then went to the supermarket and bought some apple fritters and yogurt, and finally returned to our room for breakfast and some morning news. 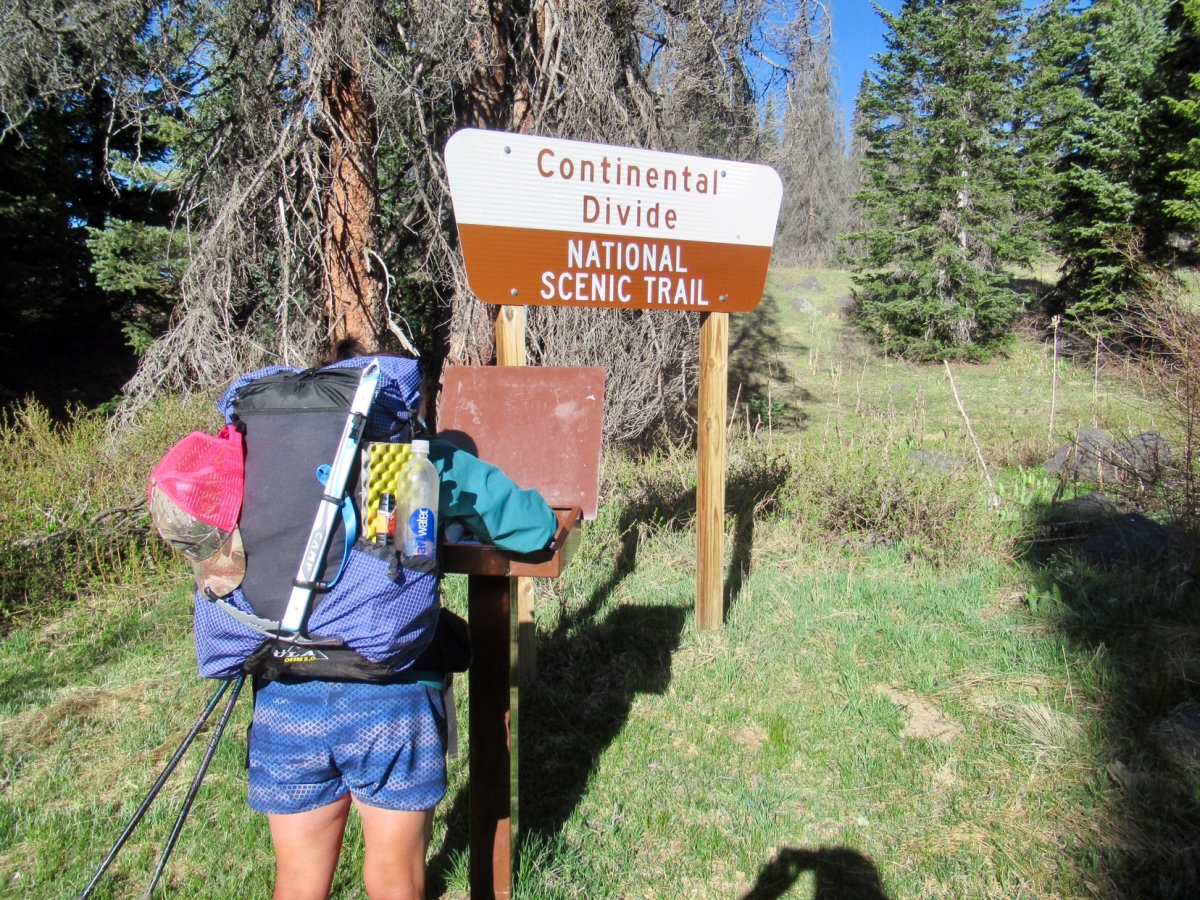 Ralph picked us up at 8am sharp, as promised. Garrett had met him at the grocery the day before, as Ralph tries to introduce himself to as many hikers as possible and offers them rides back up to the pass. He was super nice, and the ride went quickly back to the trailhead. We said our goodbyes, then headed back into the woods, happy to be back to Colorado and leave New Mexico behind (for this trip at least). 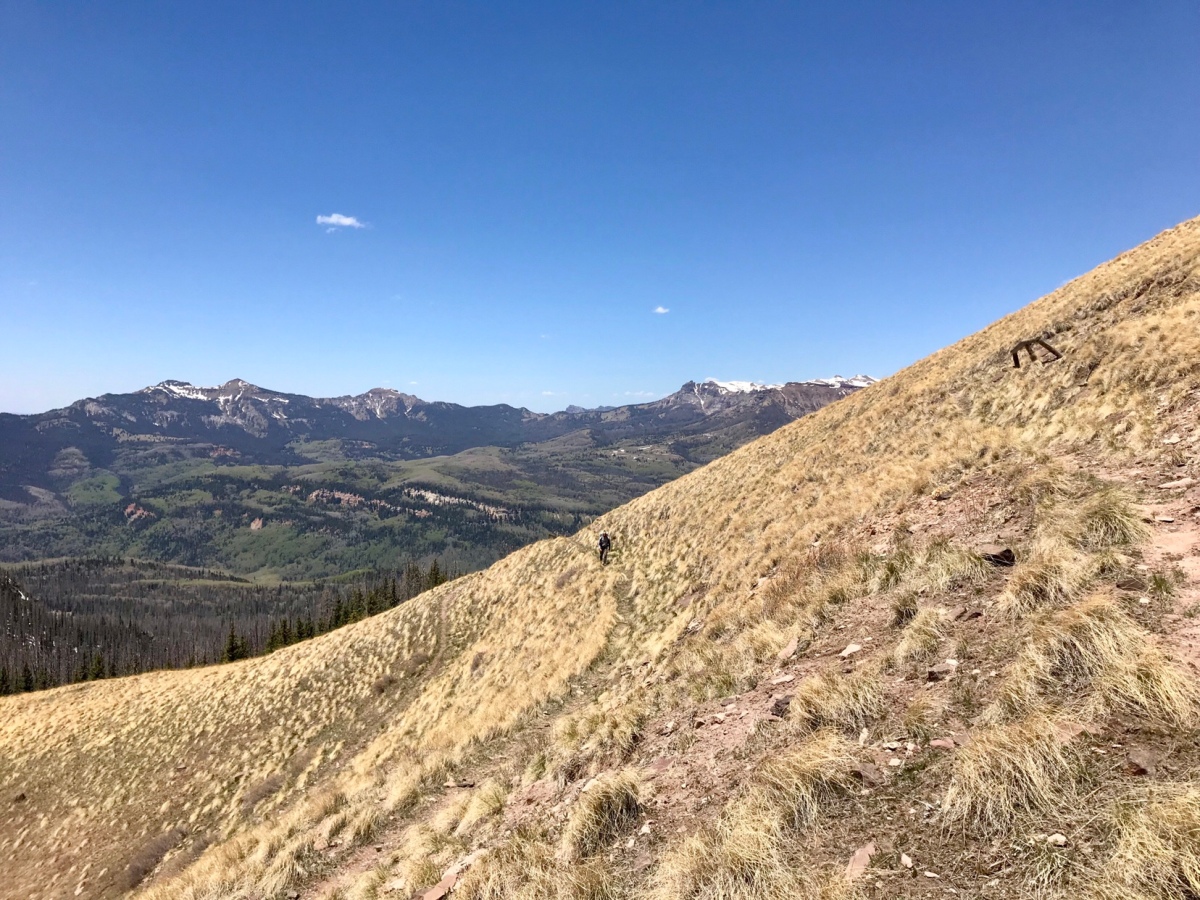 Colorado definitely felt different than New Mexico, and we slowly switchbacked up the mountain passed gurgling creeks and wildflowers. As to make sure we really understood where we were, we spotted a marmot and heard pikas chirping in the distance. At first the snow was minimal, but as we got above 11,000 feet and even above 12,000 feet we had many snow fields to figure out what to do with. If we could we’d go around, but sometimes we had to go through. 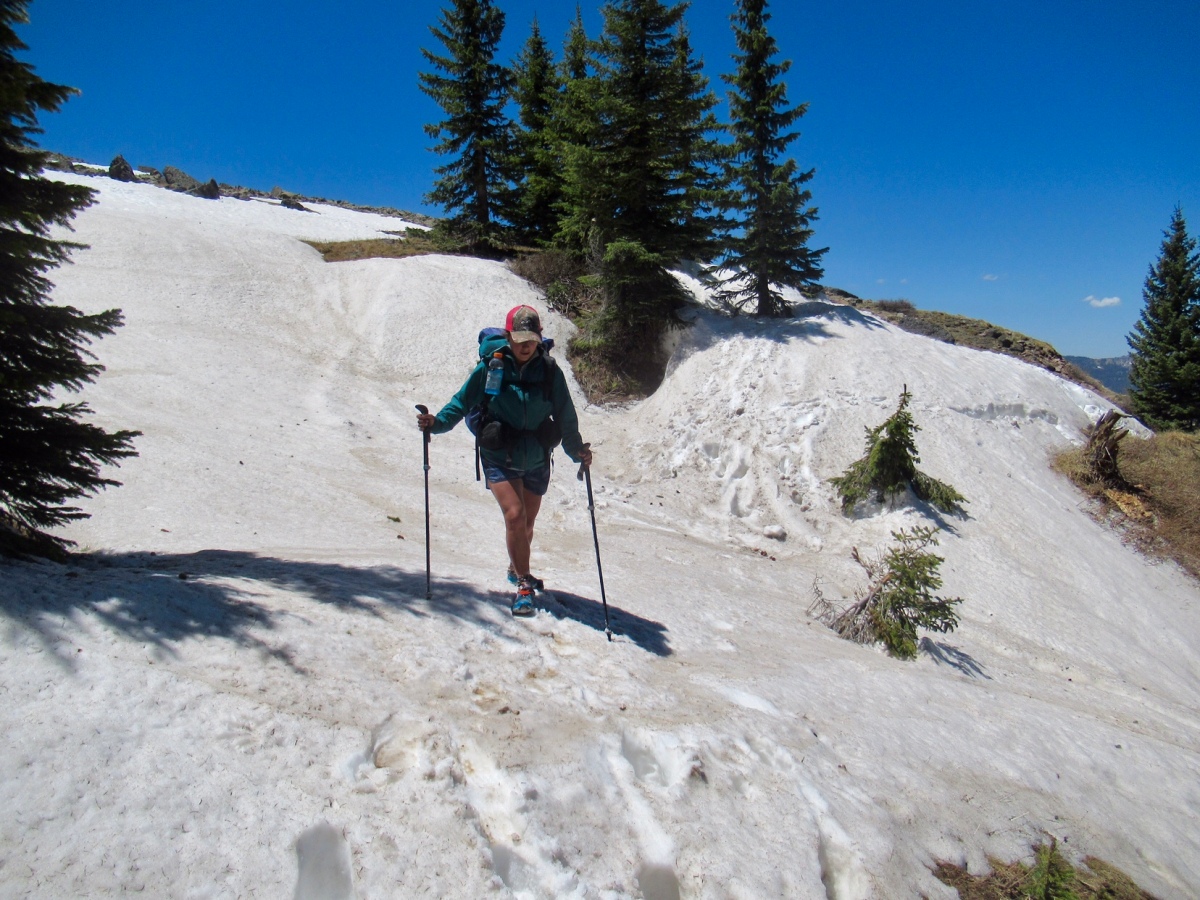 Earlier in the day the snow was firm and we could walk on top, but in the afternoon we did a considerable amount of post-holing (when your foot and/or leg plunged through the snow). Some places the snow was so deep, my butt was the only thing stopping me from sinking deeper into the snow. At first it was harmless, but the more it happened, the more painful the icy snow crystals were against my legs. Post-holing is not a new thing for us, we did plenty of it on the snowy passes in the Sierra on the PCT. On the PCT there were the footprints of hikers before us, so we could carefully step in the foot holes they had left, or better yet their holes would have formed a packed down trail we could follow, but every once and awhile you’d break through the snow. On the CDT in this section we were often finding our own way, and thus post-holing more frequently. 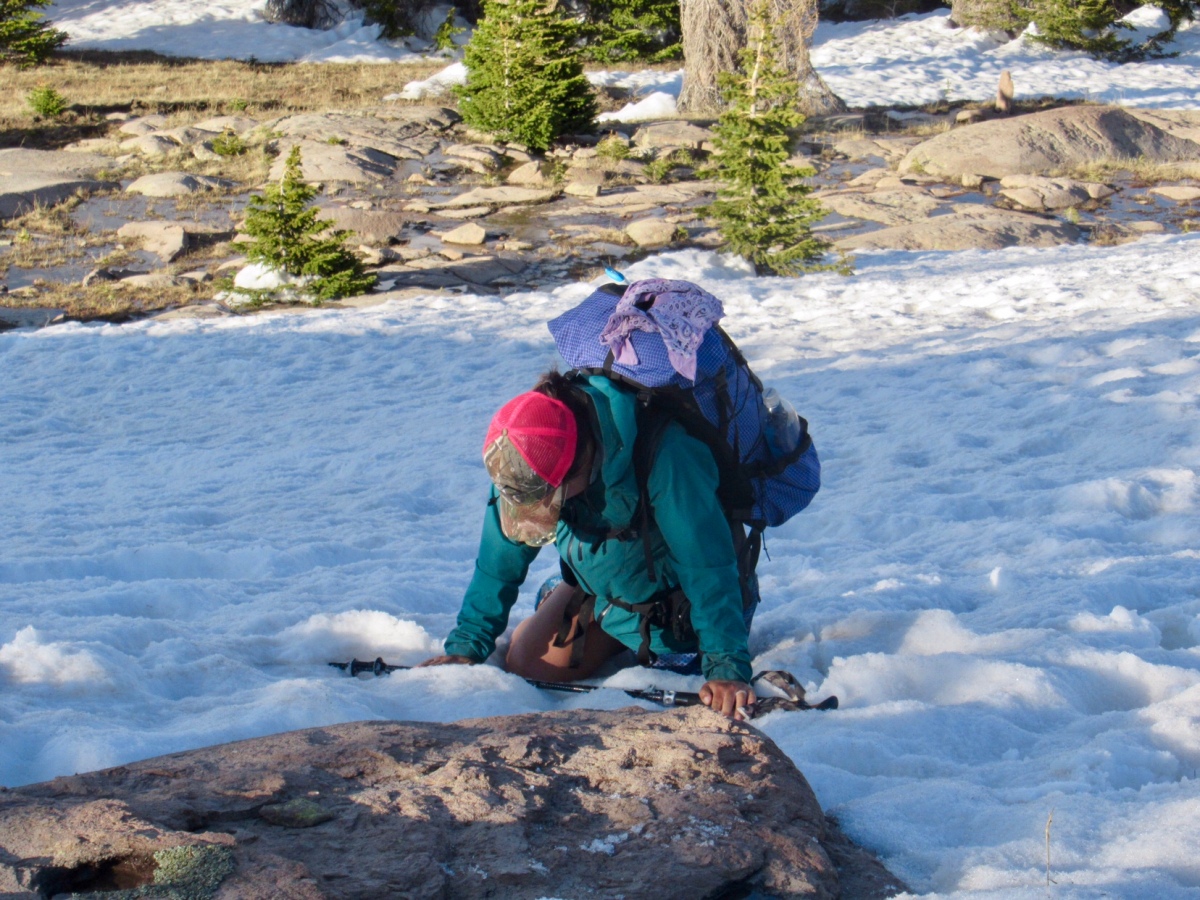 It started to get cold, and we decided to set up camp by a stream a little under 12,000 feet. I quickly changed into warm clothes, and we set up the tent and crawled in. Because it was easily freezing outside, we ate dinner in the tent. How did I know it was freezing? Because I took off my wet socks and they froze within a few minutes laying on the ground as I changed into the rest of my clothes.

The way we cook our food is we heat water to boiling, and then pour the boiling water into a container with our food we’d like to cook. We put the lid on tight, slip the container into a coozie to keep it warm. Then we wait 20 minutes or so, generally setting up the tent or filtering water, and then eat! It works great for rice sides and mac’n cheese, and some of our meals like ramen and couscous only take five minutes using this method. I must have let my noodles soak too long tonight, because when I took the lid off they were practically mush. I mixed in the cheese, and despite it being a porridge like consistency, I enjoyed it because it was warm! Tomorrow we’ll try to camp at a little lower elevation if possible. Despite the challenges the snow brought, it was still a beautiful day to be in the mountains and we are happy to have finally entered the San Juans! 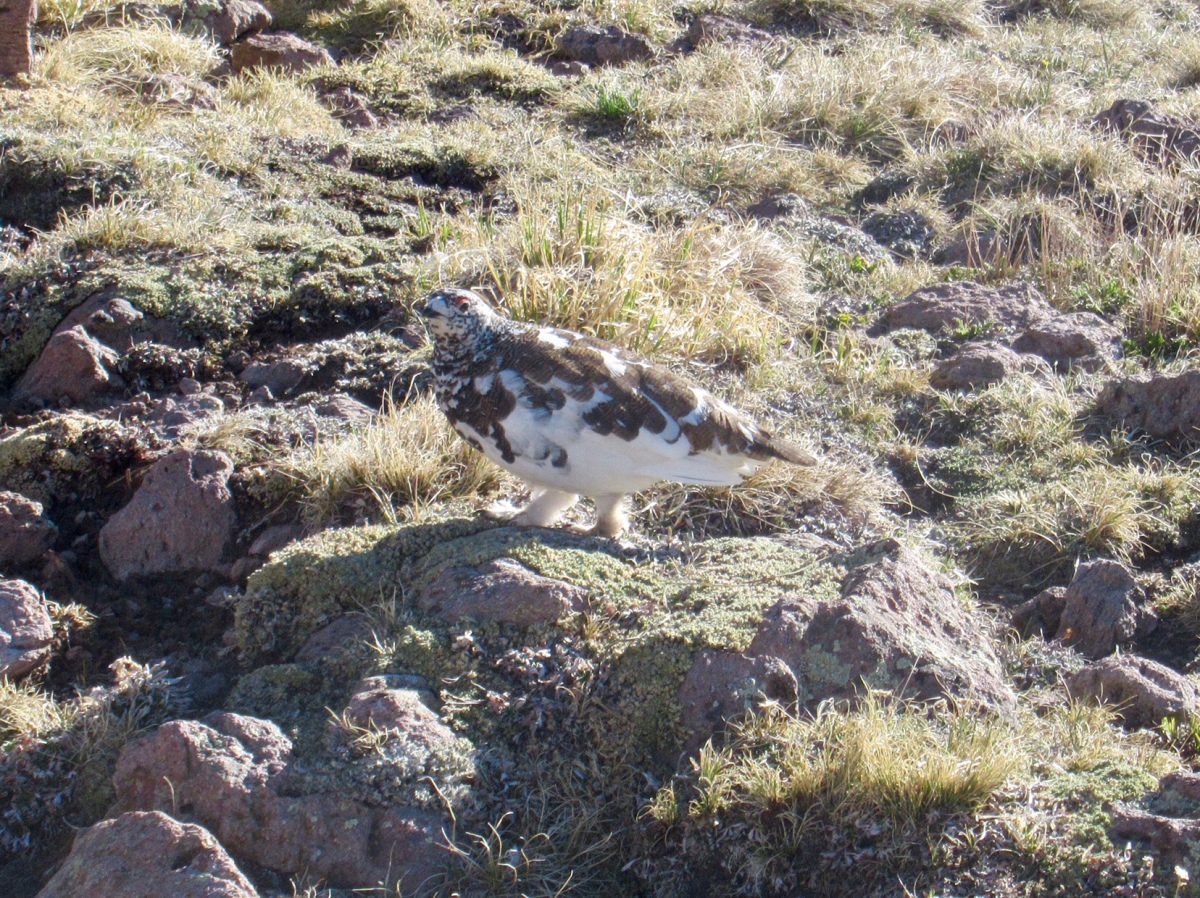 This is a white tail ptarmigan, they have furry white feet and we’ve never seen one before today!