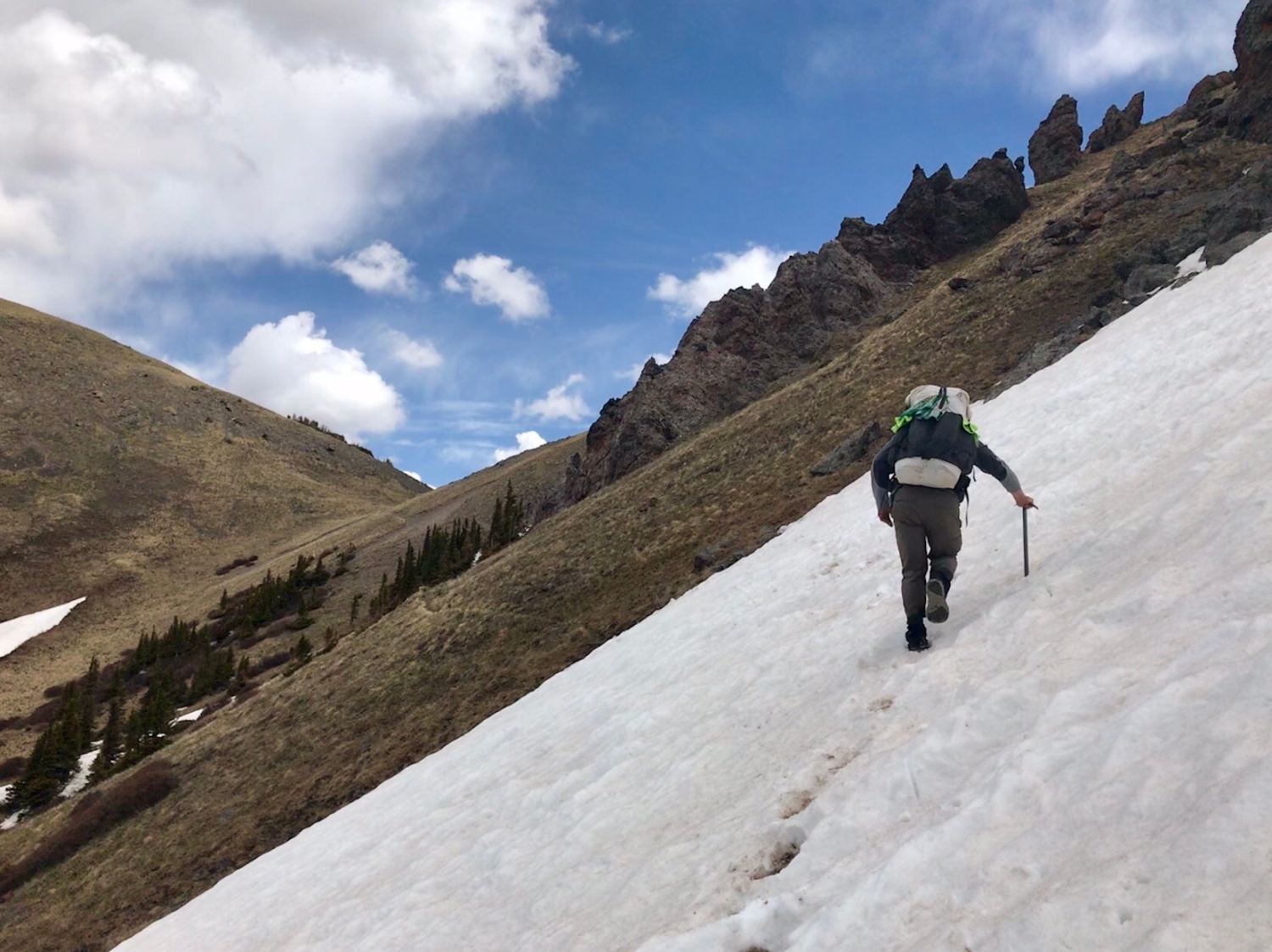 Despite sleeping at a lower elevation than the night before, closer to 10,000ft, it was still very cold over night and our shoes froze solid again. The prospect of frozen shoes made the warmth of our tent all the more inviting, and when we finally started to put on our shoes it was 7am. When we actually managed to warm our shoes up enough to put them on it was 7:30am. It’s a glamorous life, thru-hiking.

We started flat along the river, then started up a canyon back to the CDT. It was only supposed to be 3.8 miles back to the trail, but it took us most of the morning to cover. There were downed trees due to beetle kill, and more snow, and despite it best efforts we couldn’t find the trail let alone a clean line to bushwhack up the mountain. We stopped in a clearing to dry our tent out a bit from the condensation the night before, and continued up eventually reaching the trail by 11:30am. Yeesh! 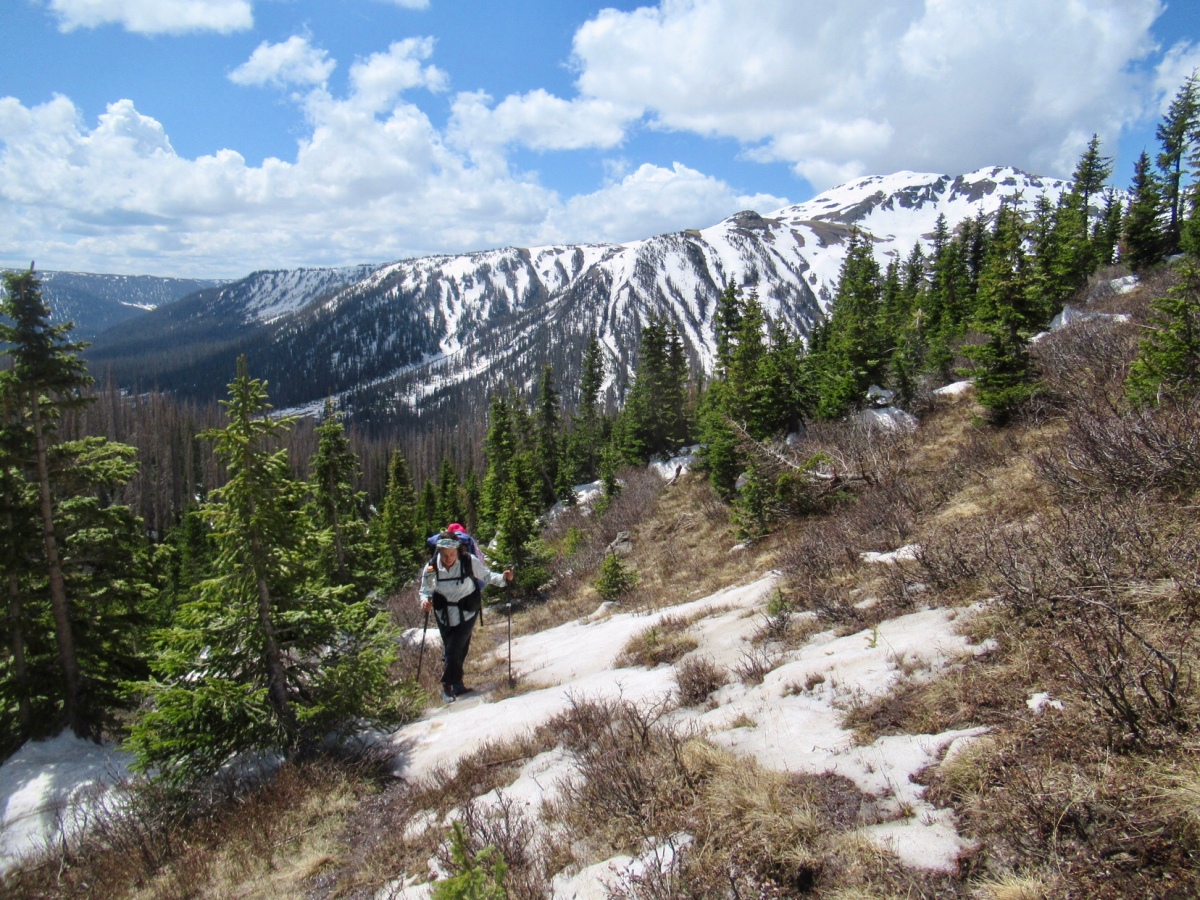 We skirted around a peak, and had lunch at a pass. I put my hiking poles away and got out my ice axe, as Garrett had started to use his on the trail around the peak we’d just traversed under. I thought at best I’d use it once or twice in the afternoon, but it soon became a much needed tool as the trail continued to sidehill snowy slope after steep snowy slope. At one point I realized I was on the steepest snow slope I’ve ever traversed, only to find that the next one was actually steeper and had a much longer slide if one where to slip. This is why we use ice axes, as if you do slip, you can self-arrest with the pick and stop yourself from dangerously sliding down hill. It is also used as a pick while walking to anchor yourself to the slope. 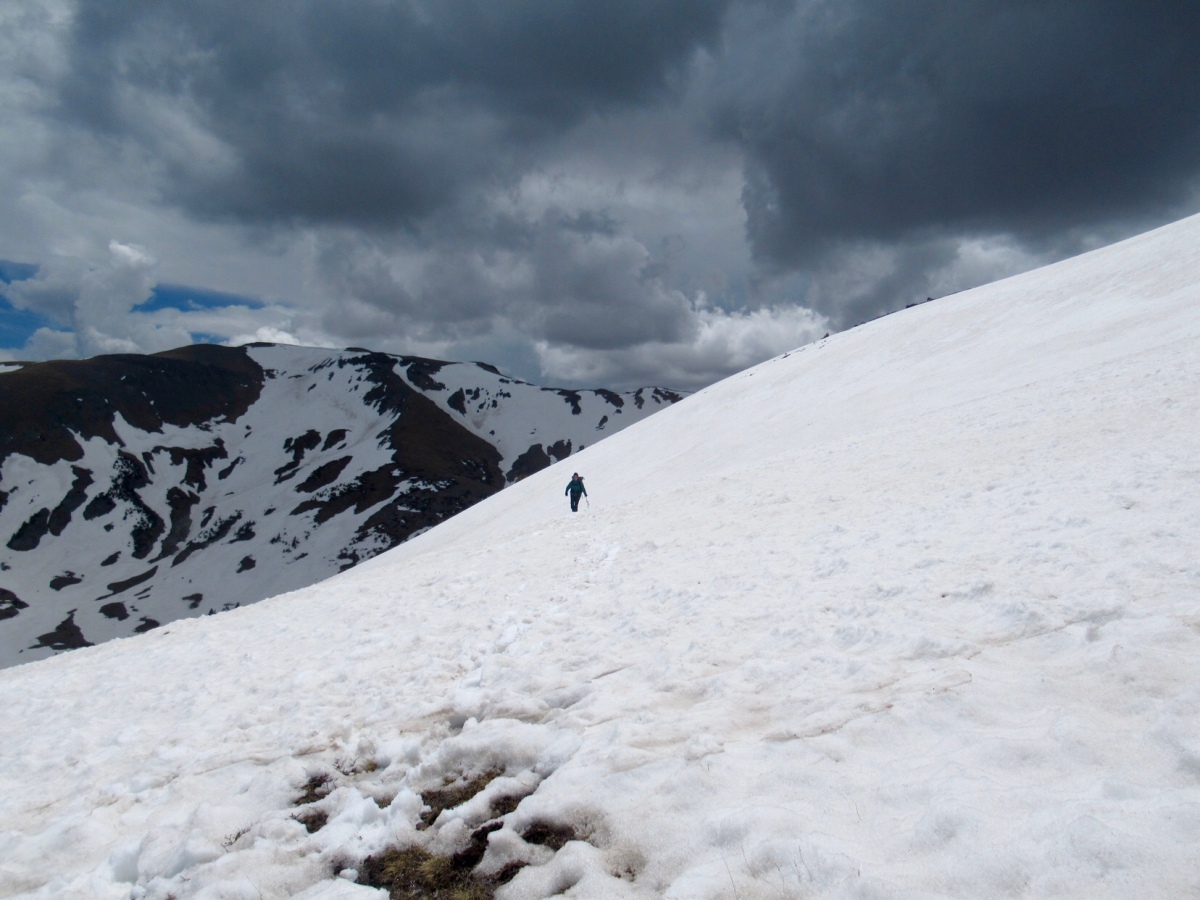 We turned the corner around a peak, and saw that the footsteps in front of us ended in what looked to be a controlled slide down the the valley below. The trail didn’t go that way, but the slope looked steep and tricky to pass. If we dropped down into the valley, we could follow the river back up to the trail. There was less snow down there, and to make our decision even easier thunder was starting to ring out over the mountains. We quickly decided to head low, and glissaded down 600ft to the valley. From there we started walking on squishy wet ground, following the river up. 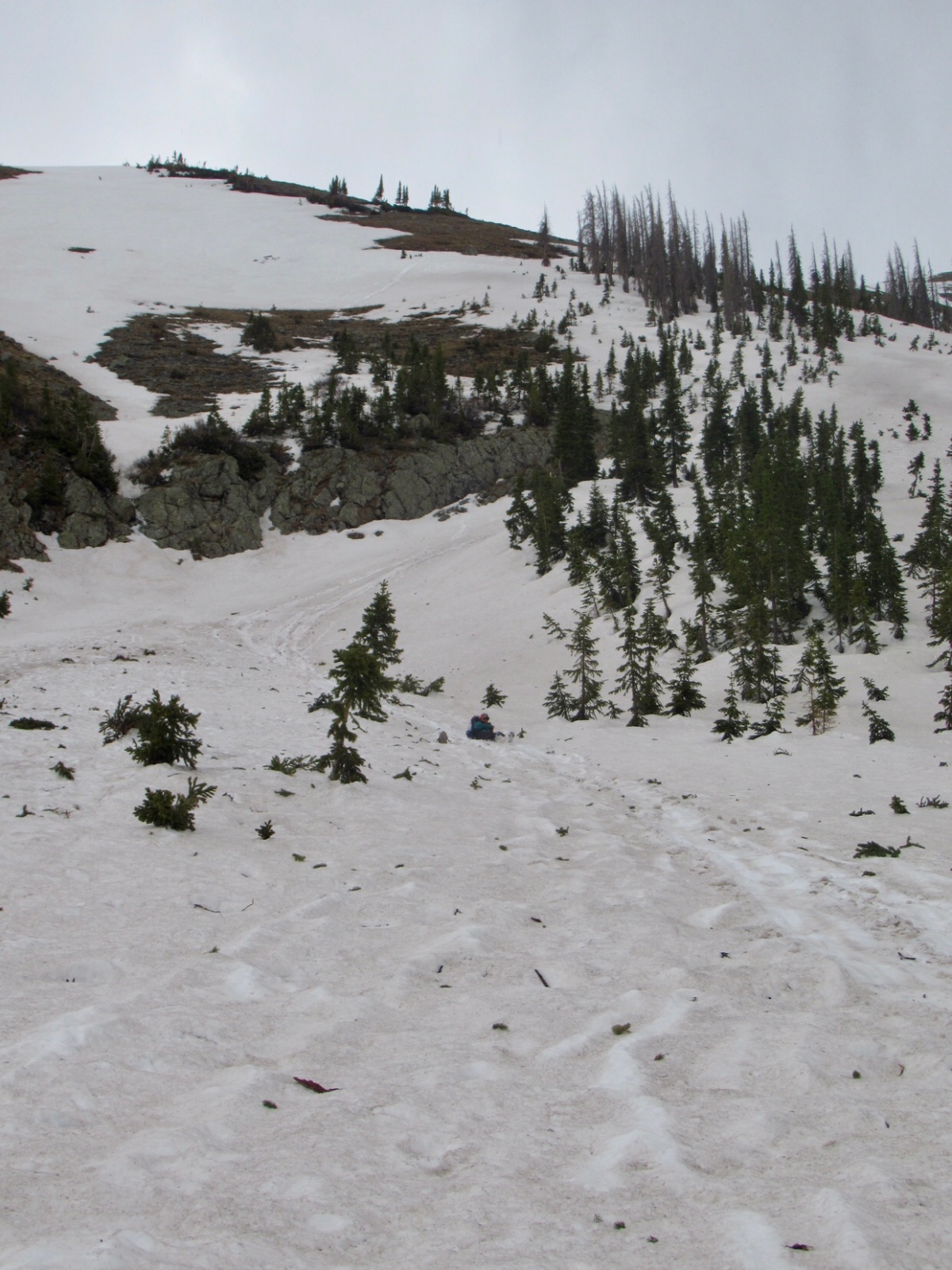 It started to snow, and even though it was barely 3pm, we started to look for a place to camp. A cold front was expected today, and it looked like it was hitting. We didn’t want to camp any higher, not knowing how it would develop. We crossed the river towards some flat ground, and Garrett waved into the distance. Sometimes he just waves at trees, thanking them for being there, but today he was waving at people- Mouse and Shadow! They were standing by their tent, so we went over to see how they were. They also had had a trying morning, and decided to pitch their tent when they heard the thunder to eat lunch. We talked about our plans, and all decided to stop early instead of heading back up to 12,000ft and questionable conditions.

They weren’t happy with their spot, as it wasn’t comfortable position for camping, just as a rain shelter, so we hiked ahead a mile and found a patch of flat ground back on the CDT. They soon caught up and camped next to us. The snow had stopped, and we were all chatting after our tents had been set up when it started to snow again, causing us to all scramble back inside.

Garrett and I had an early dinner in the tent. We had to split a rice because we had planned on averaging many more miles than we actually have so far. It was filling though, we had extra dehydrated peas, olive oil, and a pesto packet to add to it. Plus, we had a few extra wraps to help stretch it.

Tonight I’m sleeping with my shoes wrapped in a garbage bag at the foot of my sleeping bag to have unfrozen shoes in the morning! It looks like the first 5 miles tomorrow will be snowy traverses, but after that it should even out a bit. If we are able to cover 12.5 miles tomorrow, that leaves another 12.5 miles into town the next day. All we can do is see!