As we were packing up to start our day, our moose friend from the day before came back out for breakfast, so we watched him for awhile before starting to climb right back up into the mountains again. The Silverthorne route has not been well marked nor maintained, and the trail was particularly scarce and pitted making for difficult travel. Unlike other days where you come to a pass and go down, the trail also just kept going up and up and up. Our pace slowed to nearly a mile an hour, nearly twice as long as usual. 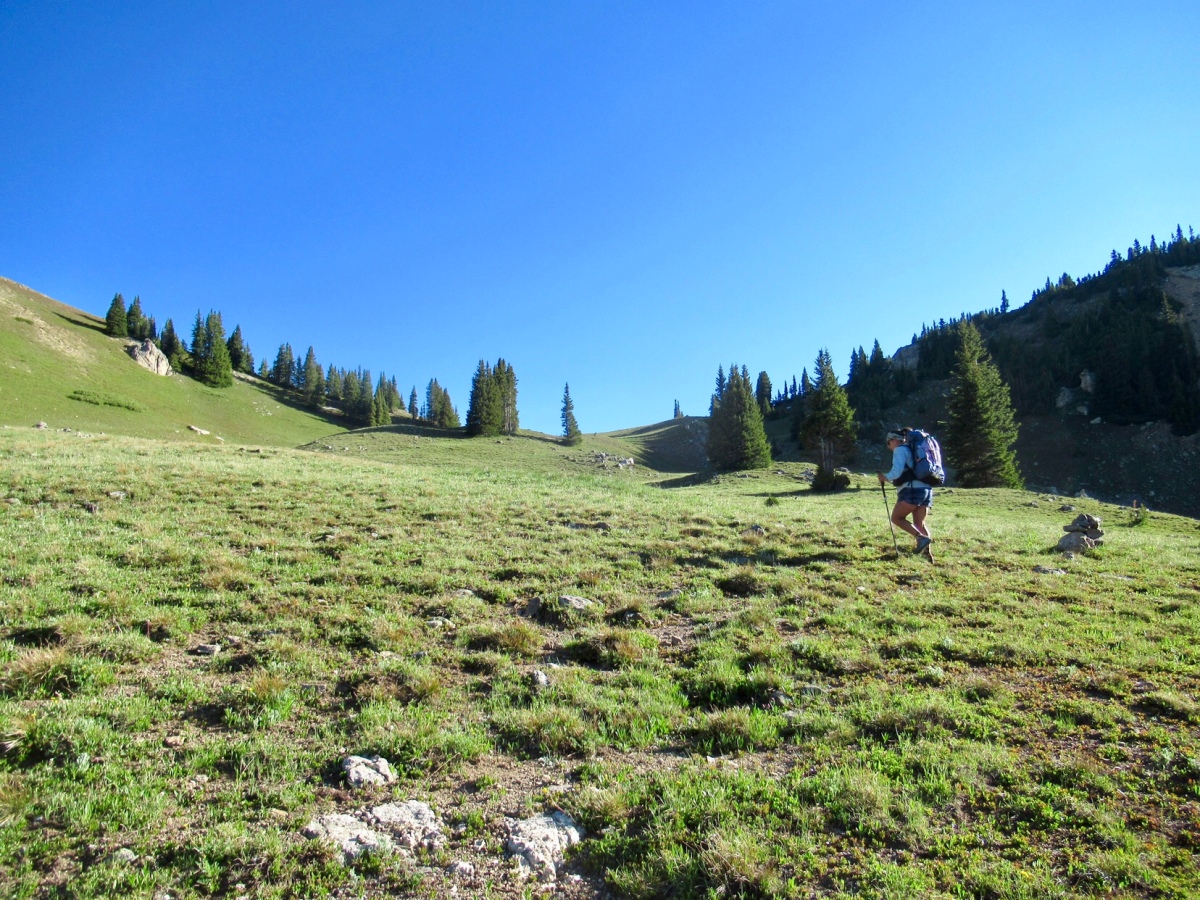 The scenery was spectacular however; as it nearly always is out here in Colorado, and as we neared the top we were treated to 360 degree views and a trail that seemed to look impossible on a mountain fin, was actually some of the easiest trail we hiked all morning. We finally started down, which should have been easy, but as we keep learning on the CDT, easy is generally anything but. Unfortunately for us, it would not be the first time this day we thought things would get easier, and they went the other way.

We arrived at a creek that we couldn’t cross without getting our feet wet, so we stayed on that side of creek following game paths instead of crossing to find the trail. We stopped to eat lunch, and saw a moose and two calves walk out of the woods nearby. Unlike the bull moose on the other side of the river that morning, a cow and two calves 100ft away from us is a much more dangerous situation. While we wanted to observe, we didn’t want to startle the mother who hadn’t seen us yet, so we stood up. She sensed our presence, and quickly retreated back into the woods with her calves in tow.

After lunch, we started up a forest service road to connect back to the official CDT at Jones Pass. Since we’d been moving slower than usual and it had started to snow, we came up with our own alternate route once we got to the pass. Our maps showed we could continue on the road down the north side of the pass, instead of continuing to stay high on the CDT, and then either take a trail or walk Route 40 back up to the trail further north.

When we arrived at Jones Pass, we found the road blocked by a large shelf of snow with a cornice across most of the top. A cornice is a lip on a snow shelf, which is generally unstable- not something you want to walk on. We assessed the situation, and due to the snow still falling out of the sky, continuing on the CDT was a no go. We investigated the snow, and found an area without a cornice that Garrett though looked passable. All of the sudden he disappeared off the side as he glissaded down.

I ventured out to the edge, and did not like what I saw. There was a step down on soft snow, and then a steep pitch of snow to slide down before it became a gentle slope. We’ve crossed sketchier sections of snow before, but for some reason all of the emotions I’d been holding in the last few days bubbled to the surface and I panicked. Garrett looked so far away, and I just felt so ridiculous for thinking I could even attempt this trail with its unofficial slogan, “embrace the brutality” while pregnant. Most of the day I’d been thinking I probably won’t be able to finish, and I really don’t even care about finishing anymore. All I wanted is to have a healthy pregnancy and baby, and the CDT seemed very unimportant.

To be going through all of these emotions alone, atop of a snow shelf was not productive. I was crying uncontrollably and hyperventilating, and experienced what I can only describe as a panic attack. I tried to think of anything to come out of it, I normally stay calm and collected during difficult moments in the outdoors, but nothing worked. We had just listened to our favorite podcast, The Trail Show, a few days earlier where one of the hosts described a similar situation she’d been through and now she has a mantra to calm herself down. I told myself that I was safe and I was calm, despite feeling neither, but repeating it over and over eventually brought me back to reason. I took a deep breath, and slid on down. It wasn’t nearly as bad as I though, and soon I was reunited with Garrett.

We hustled down to the road, as we were freezing from standing still so long, and stopped for water and a snack when we warmed up. I didn’t feel great, and was exhausted from the hiking and all the emotions of the day. We talked about it as we followed the road, but were interrupted by a campfire that hadn’t properly been put out at a campsite. Colorado has various levels of fire warnings right now, and the fact that someone had been so careless was frustrating. We stopped and put out the fire, which had been revived from the winds the day had brought. If we were in “CDT: The Video Game” we would have earned a bonus life or gained an extra power!

We continued down the forest road until we hit Route 40. It was 5.5 miles to Berthoud Pass, where we thought we’d be able to find camping in the woods, but I knew I didn’t have enough in me to make it. We debated just hitching into town, but that wouldn’t help us any, so we decided to continue up Route 40 and hoped we’d find a hidden spot off the road with water. The map looked like we’d have success, and we found a spot by a waterfall, which was more than we could have asked for. We settled in for the evening, and decided to see how I felt the next day.